Toys Then and Now 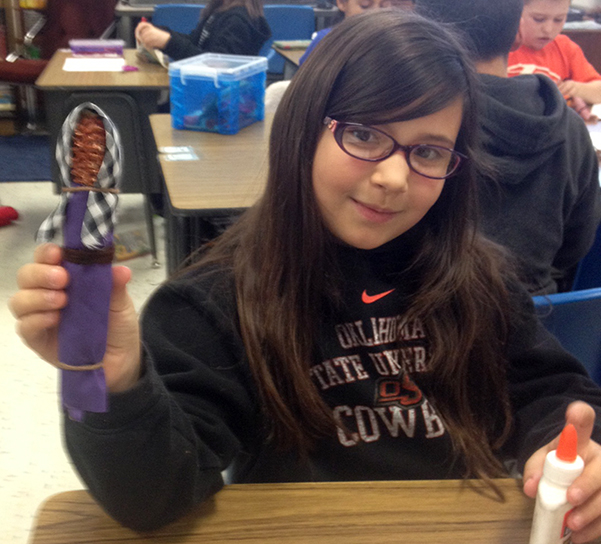 Many of the toys and gadgets your students are expecting as holiday gifts are made from plastics made with soybeans or corn. Henry Ford experimented with soy-based plastics in the production of his cars. In 1940 he swung an axe at a car trunk to demonstrate the durability of soy plastics.

Make your own plastic from cornstarch and vegetable oil

Remind your students that expensive toys and electronic games have not always been traditional gifts. "Back in the day," children looked forward to fresh fruit in their stockings and often made their own toys from what they could find around the house and farm. Fresh fruit in winter has not always been as readily available as it is now, so it was a special treat. Help your students experience a simpler time by making their own toys withÂ Corncob Toys.

Books
Bianco, Margery Williams, and Gennady Spirin, The Velveteen Rabbit: Or How Toys Became Real, Marshall Cavendish, 2011.
A toy velveteen rabbit longs to be loved, and he begins to experience this when a boy adopts him as his favorite toy.
Collodi, Carlo, and Alice Carsey,Â Pinocchio: TheTale of a Puppet, Bottom of the Hill, 2011. (Grades 2-4)
As carpenter Master Antonio begins to carve a block of pinewood into a leg for his table, the log shouts out, "Don't strike me too hard!" Antonio gives the piece of wood to his neighbor Geppetto, who is looking for a piece of wood to build a marionette. Thus begins the life of PInocchio,the puppet that turns into a boy.
de Seve, Randall, and Loren Long,Â Toy Boat,Â Philomel, 2007. (Grades PreK -2)
A little boy has a toy boat he made from a can, a cork, a yellow pencil and some white cloth. One day the wind pushes the toy boat out into the side lake. Alone now, the little boat must face fierce waves, a grumpy ferry, a sassy schooner and a growling speed boat.
Jackson, Paul,Â Origami Toys That Tumble, Fly, and Spin, Gibbs Smith, 2010. (Grades 4-6)
29 elegantly simple toys, including percussive "instruments," a wriggling fish, dogs and other creatures with moving heads or lips, a spinning star, etc. Most of the toys are made from one or two sheets of standard origami paper, and all come with hand photos showing how to hold or move them to best effect.
Paxton, Tom, and Steve Cox,Â The Marvelous Toy, Imagine, 2009. (Grades PreK-2)
"It went zip! when it moved/bop! when it stopped/ And whirr! when it stood still. / I never knew just what it was, / And I guess I never will." Picture-book version of the popular song by Tom Paxton - the story of a boy who receives a gift from his father and passes it on down to his own son.
Wulffson, Don, and Laurie Keller,Â Toys!: Amazing Stories Behind Some Great Inventions, Henry Holt and Co., 2000. (Grades 4-8)
Stories behind classic and commercial toy inventions such as Legos, Mr. Potato Head, Raggedy Ann, toy soldiers, Twister, checkers and remote control cars. Some of the most popular toys are from experiments gone awry.