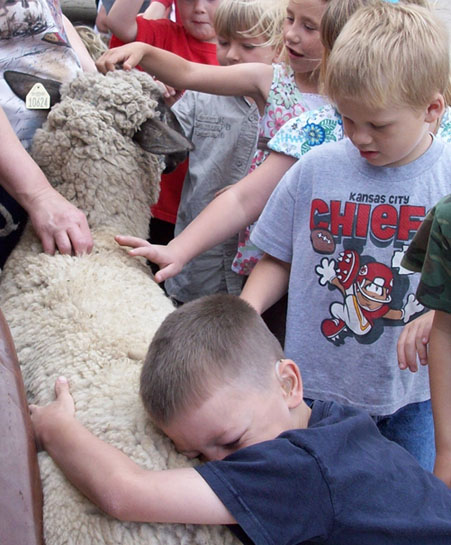 Sheep and Wool Lessons and Resources
Wool provides great protection against the cold because it doesn't freeze when it gets wet. Sheep have grazed in Oklahoma pastures at least since statehood. Oklahoma sheep produced 100,000 pounds of wool in 2017. Sheep and lamb inventory in 2018, totaled 54,000 head.
How to Sneak Up on a Sheep
Sheep have a 270-degree radius of view, almost 3/4 of a circle. Humans only see 170 degrees at best. This makes sheep very difficult to sneak up on or surprise. Sheep have poor eyesight but excellent hearing.
Counting Sheep
In order to keep accurate records, and to prevent sheep from straying, shepherds had to perform frequent head-counts of their flocks. Dating back at least to the medieval period, and continuing to the present in some areas, farms were granted access to common grazing land. To prevent overgrazing, it was necessary for each farm to keep accurate, updated head counts. Generally a count was the first action performed in the morning and the last action performed at night. A count was made after moving the sheep from one pasture to another, and after any operation involving the sheep, such as shearing, foot-trimming, etc.
Wet and Wooly
Students examine some of the characteristics of wool and become familiar with vocabulary words pertaining to the production of sheep.

Researchers in Pennsylvania have developed a biopolishing method that makes scratchy wool feel silky smooth. The US military is interested in using this biopolished wool, especially for manufacture of underwear for our troops. Underwear garments currently used contain synthetic fibers that can burn and melt into wounds during combat situations. Wool produces a self-extinguishing flame and dissipating ash when burned.

Race car drivers wear wool-lined suits to reduce their chances of being burned in a firey crash.

If you have a lab table, try this lesson:

Great Balls of Fire
- to test flammability in wool and some other common fabrics.
Sheep and Wool Facts 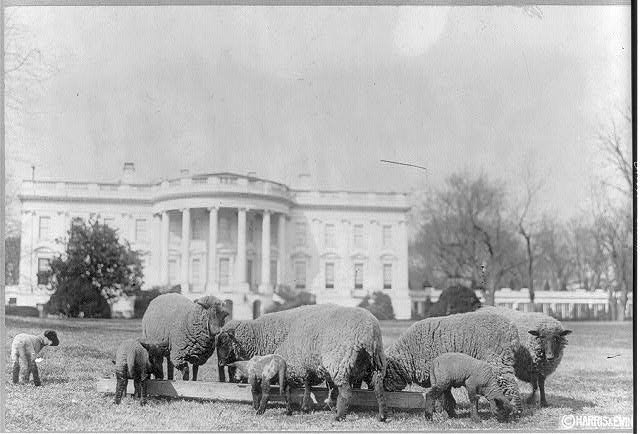 When Woodrow Wilson was President, the First Lady had sheep graze on the White House lawn to keep it neat and well-trimmed.
Writing Prompts
Songs and Poems
Why are so many nursery rhymes about children tending sheep? In ancient times sheep generally wandered around from one place to another, through the villages and around them, looking for grass to eat under the care of a shepherd. Often shepherds were children, sometimes groups of children. Joseph, from the Bible story, was out tending the sheep with his brothers when his brothers sold him to the Egyptian slave traders.
What other nursery rhymes are about children tending sheep? (Mary Had a Little Lamb; Baa, Baa, Black Sheep)
Agriculture in Art 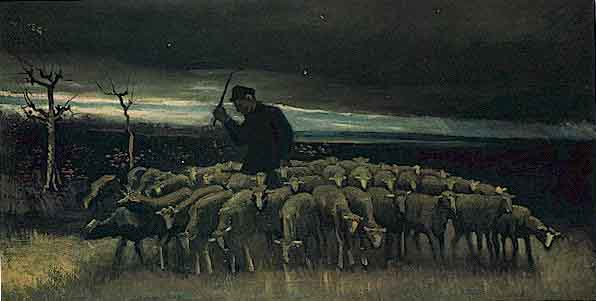 Shepherd with a Flock of Sheep, 1884 by Vincent Van Gogh
Books
Cox, Phil Roxbee, Cartwright, Steven, and Jenny Tyler,Â Sam Sheep Can't Sleep: A Phonics Flap Book, EDC, 2002. (preschool)
Words with the same phonetic pattern woven into an engaging story.
Green, Emily,Â Farm Animals: Sheep, Bellweather, 2007. (Grades K-2)
Early reader provides very basic information about sheep, including sheep shearing. Includes a glossary.
Lyon, George Ella,Â Weaving the Rainbow, Atheneum/Richard Jackson, 2004. (Grades PreK-2)
A young woman raises sheep, shears them, cards and spins the wool, dyes the yarn, and weaves it at a loom. Terms like "yearling," "skein," "warp," "weft," "shuttle," and "treadles" are understandable in context and bring richness to the text. Words and illustrations complement each other in evoking the essence of creating art and in portraying the lush countryside. In her skillfully composed watercolor artwork, Anderson directs readers' eyes and shows them what to focus on. The paintings, with their dose of impressionism, effectively depict textures, but they can also suggest steam or wind. The final spread reveals what the woman is weaving: a picture of her sheep in their pasture.
Nelson, Robin,Â From Sheep to Sweater: A Start to Finish Book, Lerner, 2003. (Grades PreK-2)


Scotton, Rob,Â Russell the Sheep, Harper Collins, 2005. (PreK-2)
Russell can't sleep. While the other sheep are dozing off, he ponders the problem of insomnia. When nothing works, he tries counting things. He starts with his feet, and then moves on to the stars. Finally, he counts sheep. Russell nods off just as the new day dawns and the others awaken.
Sloat, Teri, and Nadine Bernard Westcott,Â Farmer Brown Shears His Sheep, DK, 2000. (Grades K-2)
The sheep want their fleece back and follow the wool through the process of spinning, dyeing and knitting. Farmer Brown knits the sheep sweaters in beautiful colors so that they are happy every year to produce more wool for him.
Willems, Mo,Â Time to Sleep, Sheep the Sheep (Cat the Cat), Balzar and Bray, 2010. (Grades PreK-2)
Cat's friends all appear midway through a familiar step in the process of getting ready for bed. Sheep is reading; Pig is in the tub; Giraffe is brushing her teeth, Horse is on the toilet, etc. As the animals drift off to sleep, Owl is left on a perch, watching over them.