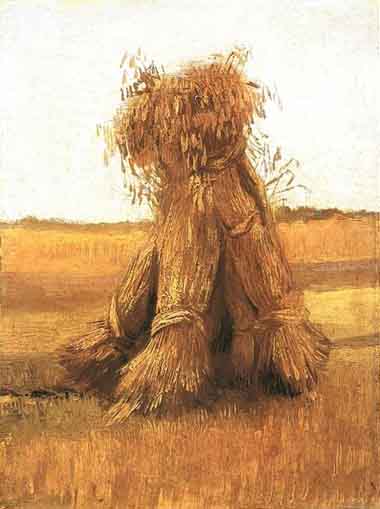 Vincent van Gogh was a Dutch Post-Impressionist painter whose work had a far-reaching influence on 20th Century art for its vivid colors and emotional impact. Little appreciated in his lifetime, his fame grew in the years after his death. He produced more than 2,000 works of art.

Van Gogh spent his early adult life working for a firm of art dealers. After a brief spell as a teacher, he became a missionary worker in a very poor mining region in Belgium. During this time he began to sketch people from the local community. Initially, Van Gogh worked only with sombre colours, until he encountered Impressionism and Neo-Impressionism in Paris.

Van Gogh viewed wheat as a central metaphor of the cycle of life, abundance and the creative process. As such, it was a theme that he consistently explored throughout his career. Setting up his easel in the fields, van Gogh painted the harvest during his last summer in Nuenen, Netherlands. His dedication to painting outdoors endured because he believed that the natural light on the fields could not be duplicated in the studio.