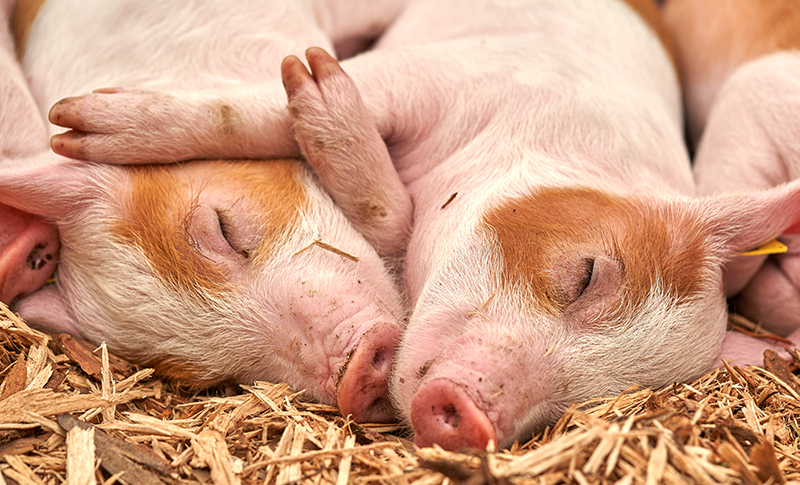 Pigs and hogs are part of the swine family. Swine were among the first of all animals to be domesticated âaround 6,000 years ago. A domesticated animal is one that is trained to live in a human environment and be of use to humans. Forty million years ago, hoglike animals roamed forests and swamps in what are now Europe and Asia. By 4900 BC hogs were domesticated in China. By 1500 BC they were being raised in Europe.

In 1539 Hernando de Soto landed at Tampa Bay, Florida, with 13 pigs, the first in North America. By the time of DeSoto's death, three years later, his hog herd had grown to 700.

There are 377 breeds of pigs around the world. In Oklahoma the most common breeds are Duroc, Hampshire, Yorkshire, Poland and Spot. Duroc pigs are mostly red but can be yellow or golden yellow. They are medium in length with droopy ears. Yorkshire hogs are white. Hampshire hogs are black with a white belt. Poland hogs are black and have droopy ears. Spots are white, with black spots.

Male swine are called "boars." Female swine are called sows. Sows give birth to litters of pigs twice a year. Each litter usually has eight to 12 baby pigs. Giving birth to baby pigs is called farrowing. Baby pigs appear very greedy when they are competing for food from their mothers. For this reason the words "pig" and "hog" have come to be associated with greedy behavior. Despite their reputation, pigs will never overeat. Once a pig is full, it stops eating.

Colonists in Pennsylvania developed the practice of "finishing" the hogs on corn (feeding them nothing but corn in the few weeks before butcheringthem). This practice improved the quality of the pork and laid the foundation for the modern pork industry. In the colonial US, hogs were driven to market in large droves over trails that later became routes used by the railroads.

Hog raising became an important commercial enterprise during the 1800s, when the Midwest farm regions were settled. The new Erie Canal system gave farmers a way to get their hogs to the cities back east. Farmers started calling their hogs "mortgage lifters" because the profits from their sales helped pay for the new homesteads.

The hogs would eat corn, grass, clover or even table scraps that would otherwise have become garbage. The word "hogwash," meaning something that is worthless, came from this practice. In some areas hogs would be turned out to find their own food. Hogs would roam freely, eating what they could findâ acorns from the ground or roots, which they dug from the ground with their snouts. On Manhattan Island, New York, the hogs rampaged through grain fields until farmers were forced to build a wall to keep them out. The street running along this wall became Wall Street.

Most people had pig pens near their homes and fed the hogs just enough to keep them returning home from their daily forage for food. Everybody had a different hog call so that only their pigs responded to their call. These calls might be a high pitched "sooie," a low pitched "wark," or a simple "here pig, here."

Lard was in high demand for baking, so pork producers grew pigs that were very fat. People could eat foods that were higher in fat then because most were involved in vigorous physical labor that caused their bodies to burn large amounts of fat and calories.

Today most people are not as active as they were back then, and health-conscious consumers want leaner meat. To meet this demand pork producers have changed the way they feed and raise their swine. Most cuts of pork today are as lean or leaner than similar cuts of beef and chicken. Some of the foods fed to swine are corn, wheat and soybean meal. Vitamins and minerals are added to increase growth and improve health. Today's hogs weigh more, but because producers plan their diets carefully, they grow more efficiently and yield more lean meat than ever before.

Many people picture a hog farm as a smelly, muddy place where pigs wallow in muddy pens. Years ago, pigs would lie in the mud to protect themselvesfrom overheating and biting insects. Today most hogs are kept indoors in buildings where producers can control temperature, humidity and other environmental factors. These buildings are well-lit and clean, so the producer can better monitor and promote the health of the hogs. Some operations use indoor and outdoor facilities. Healthy, unstressed animals are more profitable, so producers try to keep their hogs comfortable and happy.

Pork has a high nutrient density (a high level of nutrients for the level of calories). It provides protein, iron, zinc and B Vitamins (thiamin, riboflavin, niacin andVitamin B12). Pork has three times as much thiamin as any other food. Thiamin changes carbohydrates into energy and promotes a healthy appetite.

This Little Pig
Grades PreK-3: Reading Page, ELA Activities, Science and STEM
Students read about swine and complete worksheets on the reading and vocabulary. Students will compare and contrast different versions of the story of the Three Little Pigs and write their own versions. Students will build houses for the Three Little Pigs and determine if they are strong enough to stand against wind. Students will Race Balloon Pigs to see which pig is the fastest.
Hogs on a Diet
Grades PreK-2: Math
Students will examine grains used in animal feed, sort the grains and use them to practice math facts.
Truth or Hogwash?
Grades 2-5: ELA
Students will work in teams to play a game in which they answer true/false questions about swine and then research and develop questions of their own.
Which Little Piggy? Ear Notching
Grades 7-8: Math
Students identify procedures used to ear notch pigs and then read the ear notches to determine the pigs litter number and individual number. 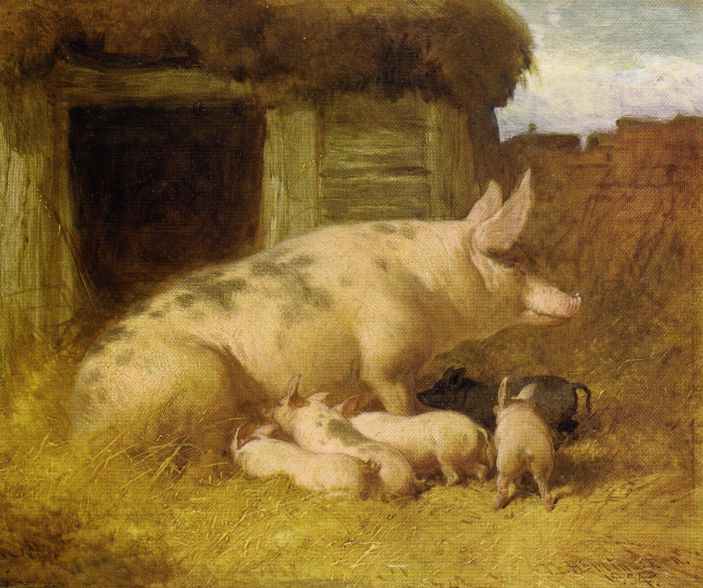