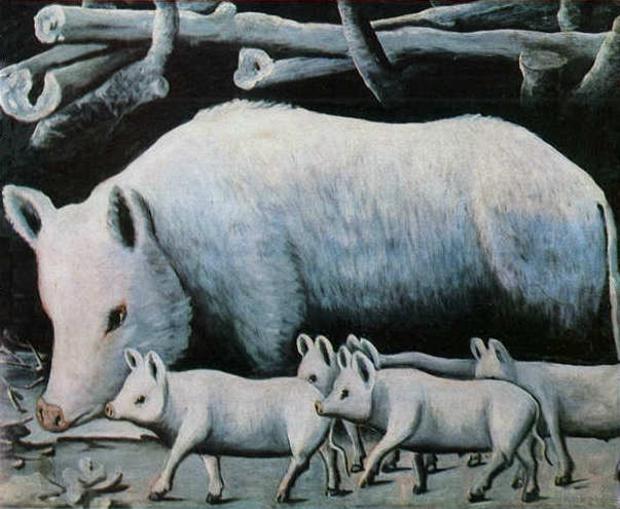 Niko Pirosmani was born in the Georgian village of Mirzaani to a peasant family in Kakheti province. His parents were farmers, who owned a small vineyard, with a few cows and oxen. He was later orphaned and left in the care of his two elder sisters, Mariam and Pepe. He moved with them to Tbilisi in 1870. In 1872, while living in a little apartment not far from Tbilisi railway station, he worked as a servant to wealthy families and learned to read and write Russian and Georgian. In 1876, he returned to Mirzaani and worked as a herdsman.

Pirosmani gradually taught himself to paint. One of his specialties was painting directly into black oilcloth. In 1882, with self-taught George Zaziashvili, he opened a painting workshop, where they made signboards. In 1890, he worked as a railroad conductor. In 1893, he co-founded a dairy farm in Tbilisi, which he left in 1901. Throughout his life, Pirosmani, who was poor, was willing to take ordinary jobs including housepainting and whitewashing buildings. He also worked for shopkeepers in Tbilisi, creating signboards, paintings, and portraits, according to their orders. Although his paintings had some local popularity (about 200 survive) his relationship with professional artists remained uneasy; making a living was always more important to him than aesthetic abstractions.

Pirosmani's paintings were influenced by the social conditions of his time and place. There are many works about merchants, shopkeepers, workmen, and noblemen groups. Pirosmanashvili was fond of nature and rural life. He rarely employed city landscapes. He made many animal paintings. He was the only Georgian animalist.