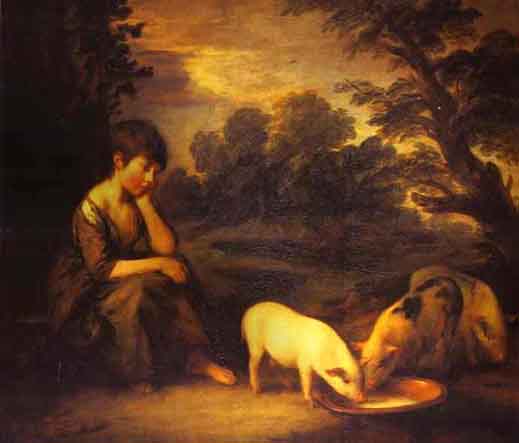 Thomas Gainsborough was an English painter who studied in London and started his career as a portrait painter. With Joshua Reynolds he was the dominant British portraitist of the second half of the 18th Century. He painted with light and rapid brush strokes and delicate colors. Gainsborough painted more from his observations than from formal academic rules.He became a favorite portraitist of the royal family. Gainsborough sometimes said that while portraiture was his profession landscape painting was his pleasure. He was one of the originators of the 18th Century British landscape school. In later years he painted pastoral subjects like the one above.

Gainsborough painted several pictures of this scene. In another version one of the little pigs has a hoof as well as his snout in the milk. Gainsborough had overheard a farmer criticizing the painting above because he said "nobody ever saw pigs feeding together but one of them has a foot in the trough." On hearing this opinion, Gainsborough went to work on an identical painting to reflect the farmer's expertise.