Oklahoma Vegetable of the Month: Carrots 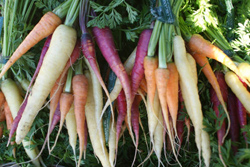 The first carrots were white, purple, red, yellow, green and black - not orange. Their roots were thin and turnip-shaped. Orange carrots did not appear until the 1700s, in Holland. Growers there bred them to match the Dutch flag. Orange carrots have the advantage of containing beta carotene, which our bodies convert to Vitamin A.

During the Second World War the carrot was widely used as a substitute for scarce commodities. In Britain the Ministry of Food promoted Woolton Pie, composed entirely of vegetables. Potato, carrot and rutabaga provided the basic ingredients, with onion and cauliflower added when available. British children ate carrots as a substitute for the fruit they could no longer obtain.

Britain's Air Ministry spread the word that a diet of carrots helped pilots see Nazi bombers attacking at night. That was a lie intended to cover a new secret radar system which pinpointed some enemy bombers before they reached the English Channel.

News stories began appearing in the British press about extraordinary personnel manning the defenses, including Flight Lieutenant John Cunningham, an RAF pilot dubbed "Cats Eyes" because his exceptional night vision allowed him to spot his prey in the dark. Cunningham's abilities were chalked up to his love of carrots. The Royal Air Force bragged that the great accuracy of British fighter pilots at night was a result of their being fed enormous quantities of carrots. The Germans bought it because their folk wisdom included the same myth.

The disinformation was so persuasive that the English public took to eating carrots to help them find their way during the blackouts.

Be a Food Explorer: Roasted Roots

Your students probably have eaten plenty of carrots, but have they tried them roasted? Roasting any kind of vegetable gives it a sweeter flavor.

Bring carrots and two or three (or more) of the following root vegetables to class: potatoes, parsnips, leeks, onions, garlic, rutabaga winter squash. Slice all into 1/4-inch thick slices. Lightly brush an aluminum roasting pan with olive oil and butter. Coat both sides of the vegetables with the oil from the pan. Season to taste with garlic salt and pepper. Roast in a 500 degree F. oven for 10 minutes or until the vegetables begin to brown. Then turn the vegetables and continue to roast for 5 to 10 minutes more.