Thanksgiving is the Fourth Thursday of November

Archaeologists believe that feasting is one of humanity's most universal and unique social behaviors. Researchers theorize that feasts may have played a significant role in easing the potentially rocky transition from a hunting-gathering lifestyle to one of agricultural dependency. Feasts help integrate communities by providing a sense of community. The earliest feasts were probably funeral feasts, which brought communities together to mark the last event in a person's life and send the deceased off to another life.

The holiday we celebrate as Thanksgiving is a harvest feast. All over the world, throughout history, people have celebrated the end of the hard work of harvest by feasting on the fruits of their labor. Our tradition is to commemmorate the Pilgrims' Thanksgiving feast at Plymouth Plantation in 1621, but before that, Spanish settlers had celebrated a Thanksgiving in 1565, in what is now Saint Augustine, Florida. For thousands of years earlier, the people who were here before either group of settlers arrived had been holding similar feasts to celebrate the harvest. One such celebration was the Green Corn Ceremony, or Busk, celebrated by Oklahoma's Muskogee tribe. Read more in this lesson:Â Thanksgiving: Celebrating the Harvest.

We do not know the exact date of the celebration we now call the First Thanksgiving, but it was probably in late September or early October, soon after their crop of corn, squash, beans, barley, and peas had been harvested. It was also a time during which Plymouth Harbor played host to a tremendous number of migrating birds, particularly ducks and geese, and [William] Bradford ordered four men to go out "fowling." It took only a few hours for Plymouth's hunters to kill enough ducks and geese to feed the settlement for a week. Now that they had 'gathered the fruits of our labors," Bradford declared it time to 'rejoice together...after a special manner.'

...Countless Victorian-era engravings notwithstanding, the Pilgrims did not spend the day sitting around a long table draped with a white linen cloth, clasping each other's hands in prayer as a few curious Indians looked on. Instead of an English affair, the First Thanksgiving soon became an overwhlmingly Native celebration when Massasoit and a hundred Pokanokets (more than twice the entire English population of Plymouth) arrived at the settlement and soon provided five freshly killed deer....most of the celebrants stood, squatted, or sat on the ground as they clustered around outdoor fires, where the deer and birds turned on wooden spits and where pottagesâstews into which varieties of meats and vegetables were thrownâsimmered invitingly.

In addition to ducks and deer, there was, according to Bradford, a 'good store of wild turkeys' in the fall of 1621...The Pilgrims may have also added fish to their meal of birds and deer...Alas, the Pilgrims were without pumpkin pies or cranberry sauce. There were also no forks, which did not appear at Plymouth until the last decades of the seventeenth century. The Pilgrims ate with their fingers and their knives. 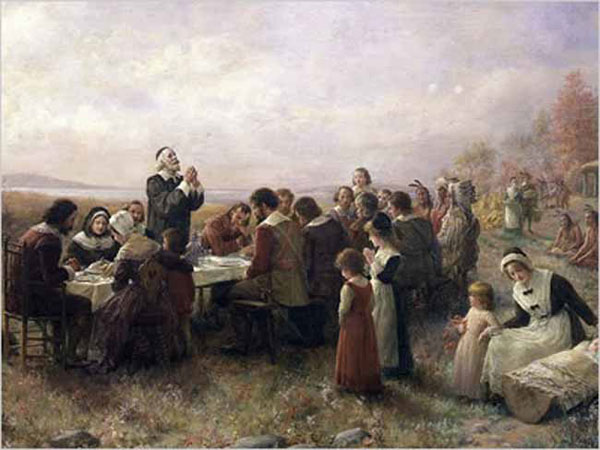 Based on what you read above, how is this picture different from how the Pilgrim's Thanksgiving probably really looked? Draw your own picture.

Make Mine Turkey
Books
Arenstam, Peter, Kemp, John, Grace, Catherine O'Neill and Plimoth Plantation,Â Mayflower 1620: A New Look at a Pilgrim Voyage, National Geographic Children's, 2007.
Large-size photo essay draws on exhibits in the living history museum Plimoth Plantation to re-create a historical event distinguishing fact from fiction.
Child, L. Maria, and Matt Tavares,Â Over the River and Through the Woods: The New England Boy's Song About Thanksgiving Day, Candlewick, 2011.
The horse is ready, the air is bracing and everyone is bundled into the sleigh. The family is off to Grandfather's house for a delicious feast. A new treatment of the old song.
D'Amico, Joan, and Karen E. Drummond,Â The US History Cookbook: Delicious Recipes and Exciting Events From the Past, Jossey-Bass, 2003.
How Americans have lived and dined over the centuries. Includes food timelines, kid-friendly recipes and fun food facts.
Gibbons, Gail,Â Thanksgiving Is..., Holiday House, 2005. (Grades PreK-2)
Placing the holiday in the context of harvest festivals throughout time, Gibbons tells the story of the Pilgrims, their Native American friends, and the first Thanksgiving with minimal text and colorful illustrations that supply further details.
Grace, Catherine O'Neill,Â 1621: A New Look at Thanksgiving, National Geographic Children's, 2004. (Grades 3-5)
Well-researched account of the Wampanoag side of the Thanksgiving story. Provides background on the Wampanoag, colonization, Indian diplomacy, the harvest of 1621 and the evolution of the Thanksgiving story.
Melmed, Laura Krauss, and Mark Buehner,Â This First Thanksgiving Day: A Counting Story, HarperCollins, 2003. (Grades PreK-2)
Through a simple, rhyming text of 12 short poems, young readers experience 10 Wampanoag and Pilgrim friends getting ready for the first harvest feast in the New World.
Osborne, Mary Pope, and Sal Mardocca,Â Thanksgiving on Thursday, Random House for Young Readers, 2002. (Grades 1and up)
The Magic Tree House whisks Jack and Annie back to 1621 on the first Thanksgiving Day.