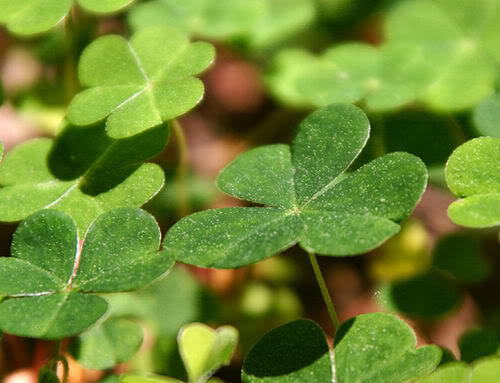 Shamrock is the English form of the Irish word seamrog which, literally translated, means "little clover." Clover is one of the major crops grown in Oklahoma as hay, and hay was Oklahoma's fourth most valuable commodity in 2017. Clover is extremely delicious and fattening to cattle. This fact is where we get the idiomatic phrase "in clover," meaning a carefree life of ease, comfort, or prosperity. Clover also grows, often unwanted, in most lawns in Oklahoma. Clover is a legume, which means it is good for the soil. Legumes capture nitrogen. Clover is one of the first plants to start greening up in the spring.

Find a nice field of clover, and take your students outdoors to look for four-leaf clovers.

Writing Prompts
Lessons and resources related to clover and hay
They Don't Just Eat Grass
Cattle love to eat clover, but, just like humans, they need other foods, too

What nationwide youth organization has a four-leaf clover as its symbol?

Learn about the origins of 4-H and its importance to agricultural research with this online AITC lesson:

Head, Heart, Hands, Health
Red Dirt Groundbreaker
Bermuda John Fields
One of the first acts of the legislature of the Oklahoma Territory was to establish an agricultural college in Stillwater. Iowa-born John Fields was one of the first two assistant professors. In 1899 he was appointed first director of the Oklahoma Agricultural Experiment Station. The purpose of the Experiment Station was to conduct experiments to help Oklahoma farmers.
Fields was a very good speaker. For the next several years he became the most familiar figure in Oklahoma associated with agriculture. He was one of the authors of a territorial law passed in 1905 making the teaching of agriculture in the public schools mandatory. The next year the Oklahoma Constitutional Convention included a provision in the new constitution for the compulsory teaching of the elements of agriculture, horticulture, stock feeding and domestic science.
Fields was responsible for popularizing and distributing Bermuda grass in the state. This all-purpose pasture and lawn grass made its appearance in Oklahoma around the turn of the century. Fields gathered the available information on the grass and planted it on the college farm in 1900. He sodded the campus with it, pastured livestock on it and published an experiment station bulletin on the subject. As late as 1903, some farmers still believed the plant to be harmful to livestock. To overcome their worries, Fields raised and shipped Bermuda grass roots to all who would pay the shipping costs. He was very happy when important citizens such as former governor Thompson B. Ferguson of Watonga,requested Bermuda grass for their lawns. The giveaway brought the grass and Fields a great deal of publicity. By June, 1906, roots had been shipped to more than 600 farmers, and some were calling Fields "Bermuda John."
In 1906 Fields resigned from the experiment station to become editor of theÂ Oklahoma Farm Journal. He ran for governor in 1922 but was defeated by his opponent, John Walton.
Book
Geisert, Bonnie,Â Haystack, Houghton Mifflin, 2003. (Grades K-3)
Beginning with details about mowing, drying and tromping hay, the narrative moves on to explain the haystack's important purposes: to provide food and a shelter from the wind for cows during the winter; during warmer weather, to serve as a resting and feeding place for pigs. In return, the animals' manure is used as fertilizer for the next year's hay, thus continuing the cycle.