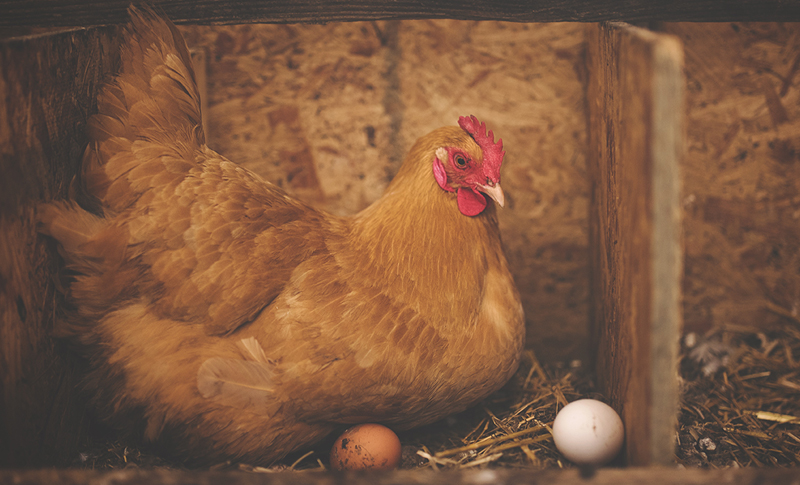 The chicken is probably the most common bird in the world. It is raised for meat, eggs and byproducts such as feathers. Some people even raise chickens as a hobby. The chickens we know today came from red jungle fowl of southeast Asia, which were first tamed around 2300 BC. Chickens were kept for their eggs. When the birds grew too old to lay, they were used for meat.

Most of the eggs we eat come from chickens. Chickens are in the poultry family, along with ducks, geese and turkeys. Farmers raise poultry for their eggs and for their meat.

Chicken producers place nests in their hen houses so the hens will lay their eggs in places that are safe and protected. If the farmer didn't provide a nest, the hen would hide her own nest so carefully that the farmer might not be able to find it.

Hens start laying at 22 weeks of age. Laying hens produce about 240 eggs each year. During the hen's most productive period, she may lay an egg about six out of every seven days. Eggs hatch in 21 days. The hen requires at least 25 hours to produce an egg. Thirty minutes later, she starts all over again.

Chickens do not lay eggs until they receive a light cue, either from natural sunlight or artificial light. The light stimulates a gland near the chicken's eye, which triggers the release of an egg cell from the chicken's ovary. A chicken will lay bigger and stronger eggs if the lighting is changed to make her think a day is 28 hours long.

A young chick is very small when it hatches. After eight weeks it has grown to weigh about 3 1/2 pounds.

A chicken is different from other birds because it has a comb and two wattles. The comb is the red appendage on top of the head, and wattles are the two appendages under the beak.
Because the pecking order of the hens sometimes causes them to hurt each other, the beaks of baby chickens are trimmed.

China raises more chickens than any other country in the world. The largest number of chickens grown in the US are grown on commercial broiler farms. Broilers are seven- to eight-week-old chickens raised for their heavy meat content.

The major broiler-producing states are Arkansas, Georgia, Alabama, North Carolina, Mississippi, Texas, Delaware and Maryland. Oklahoma ranks number 10 in broiler production. Poultry and eggs are the third most valuable agricultural product in Oklahoma, behind cattle and hogs.
Most chickens weigh between seven and 10 pounds. Hens start laying at 22 weeks of age. A good layer will lay 206-280 eggs a year during her most productive period. Eggs hatch in 21 days.

Eggs are a good source of protein. Research shows that eating high-quality protein foods like eggs for breakfast can help you feel more satisfied and energized throughout the day. Eggs help build and maintain muscles.

The eggshell is a hard, three-layered container composed of calcium carbonate. Its purpose is to protect the enclosed embryo from the weight of the parent's body while the bird develops inside.
With the exception of those birds that warm their eggs in mounds of dirt, all birds use body heat to incubate their eggs and turn them regularly to keep the temperature even. In natural incubation the hen turns the eggs as she gets off the nest and moves them with her beak while she is sitting on them.

Like all living things, the developing chick must have three things to liveâfood, water and air. The food is provided by the yolk, which is mostly protein. Protein helps to build strong bones and muscles. Water comes from both the yolk and the albumen. The albumen is the clear portion of the egg, most commonly called the “egg white.” The albumen is 85 percent water, and the yolk is about 50 percent water. Air passes through the shell and the membrane. The chicken uses the oxygen and passes carbon dioxide back through the shell.

Each egg shell has a coating or covering, called a bloom, that seals its pores, prevents bacteria from getting inside and reduces moisture loss. Eggs are washed before they are sent to the market. This is necessary for cleanliness but removes the bloom. To restore this protection, packers give the eggs a light coating of edible mineral oil. Properly handled and stored, eggs rarely spoil but will simply dry up if kept long enough.

Although the exact shape of an egg is as individual as the hen herself, most eggs are roughly egg-shaped. Some abnormalities that can be found in the shells of fresh eggs are ridges, bulges and rough texture. Eggs having any of these abnormalities would get poor eggshell ratings from the US Department of Agriculture (USDA). Some extreme oddities in eggshell shapes include shells that are long, appear bent, or look as though they have been mashed in on one side. It would be very rare to find any of these shapes on grocery store shelves. Wild birds have shells that are more pointed than those of most domesticated varieties.

The size of an egg is an inherited characteristic, and poultry breeders spend large amounts of time and effort to select strains for egg size. When a pullet (a young hen less than a year old) first begins laying eggs, her eggs are small. After 15 to 20 days of laying, the size of her eggs will reach the size of a standard grocery store egg. Egg size varies greatly from one kind of bird to another. The eggs of domestic chickens weigh an average 58 grams. Those of domestic turkey are about 85 grams. Hummingbirds lay eggs weighing a half a gram. Quail eggs weigh an average nine grams, and ostriches lay eggs weighing an average 1,400 grams.

Chicken and Eggs Reading Page
Grades PreK-4: ELA
Students read about the life cycles of chickens and their eggs. Students read statements about chickens and distinguish between fact and opinion. Students will design their own advertisements for poultry, using a mixture of opinion and fact. Students will read and discuss a poem about chickens.
A Lucky Break
Grades 4-6: ELA
Students will read about the ancient Etruscans and the origins of pulling the wishbone of a chicken a part for good luck, identify the main idea and supporting details of the passage, research to learn more about the ancient Etruscans, identify and decipher some common phrases in the English language related to poultry, learn the origins of some other poultry-related idioms, and use the idioms to write stories.
Clucking Chickens
Grades K-4: VA, Music, Science
Students create the model of a chicken that makes chicken sounds using a plastic cup and string. Students use the model of a chicken to experiment with different sounds.
Egg Toss Math
Grades PreK-2 Math, PE
Students practice counting by playing a game with an egg carton and plastic eggs. Students estimate and measure distances in a game of "Egg Toss" with real boiled eggs or alternative. Students use plastic eggs as manipulatives for sorting, patterning, and to estimate and measure volume.
The Shape of Things
Grades 6-8: Science, Math
Students will read about eggs and dome construction, based on the shape of an egg. Students will conduct an experiment to demonstrate the strength of the egg. Students will design and build arch and dome structures. Students will conduct an experiment to demonstate how air passes through an eggshell. 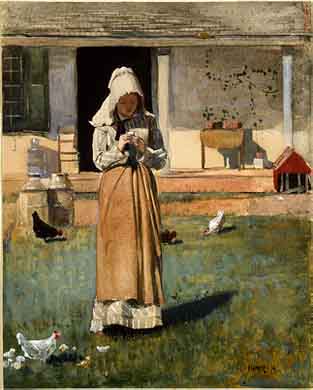 The Sick Chicken, 1874 by Winslow Homer