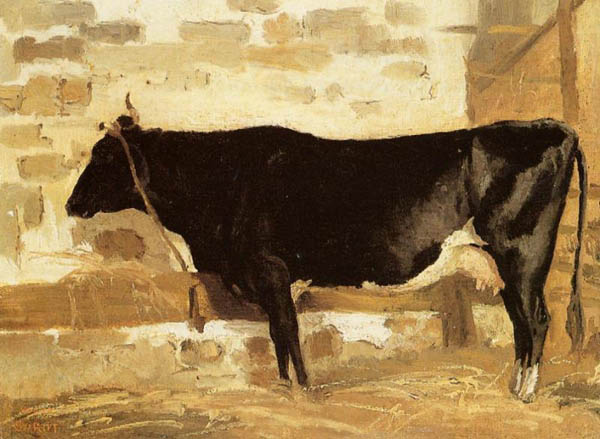 Cow in a Stable, 1845 by Jean-Baptiste-Camille Corot
Background and Vocabulary

The story of Grady, the cow, is aÂ true storyÂ that happened in Yukon, Oklahoma, on February 22, 1949. Read the storyÂ here.

Animal instinct is fight or flight. In the story, Grady whirled around and started chasing her owner when he untied her because she was scared. Then she tried to get away by jumping through the only opening she saw, the silo window.

A silo is the tall building you sometimes see on old farms. It looks something like a rocket. In the past, farmers used silos to make silage, a kind of fermented feed for farm animals. The farmer makes the silage by chopping fresh green plants (alfalfa, corn, grass) and storing it in a place where no air can get in. This allows the plants to ferment so they are easier to digest. These days most silage is made in pits dug in the ground and covered with plastic.

Grady was a Hereford cow. Hereford cattle are red, with white faces and bellies. Some have white markings on their bodies, too. This breed of cattle originally came from England and is raised for meat. Grady weighed 1200 pounds. A typical beef cow weighs about 1,000 pounds. A calf typically weighs between 75 and 95 pounds at birth. A bull weighs about 1,500 pounds.

Grady's calf was born in the middle of winter, but most beef calves are born either in the fall or the spring. Ranchers try to arrange it that way because grazing is better at those times of year, and the weather is not so harsh. They also try to time the birth of calves so they are ready for market at the time when market prices are best. Dairy cattle are born year-round so the supply of milk will be constant.

Like Grady's owner, Bill Mach, most cattlemen go to great lengths to take good care of their animals. A good cattleman works very closely with each one of his or her animals to make sure they stay healthy, strong and free of stress and injury. An animal that is abused or neglected will not bring a good price at the market.

Many ranchers bring cows into sheds and barns during calving time. That way the rancher can watch the cows and help them give birth if necessary. The cows are checked often, day and night, during calving season.

Calves are born in 283 days. After the calf is several days old, it is moved into a pasture with its mother. The mother cows are given extra feed, such as hay and cattle cubes, to keep them healthy. Calves are normally weaned at seven to nine months of age, when they weigh between 400 and 600 pounds. By this time the calves do not need milk because they can eat grass and drink water .

After weaning, heavier calves (600-650 pounds) may be sold directly to feed lots. Most calves weaned in the fall weigh between 350 and 450 pounds. These lighter calves are classified as stockers and will be grazed on lush wheat pastures across Oklahoma until they reach feeder weights between 600 and 750 pounds in March or April of the next year. At that time they go to commercial feed lots to be fed to an acceptable slaughter weight of about 1200 pounds. Most of the calves produced in Oklahoma are sent to feed lots spread across western Kansas, Oklahoma, Nebraska and Texas.