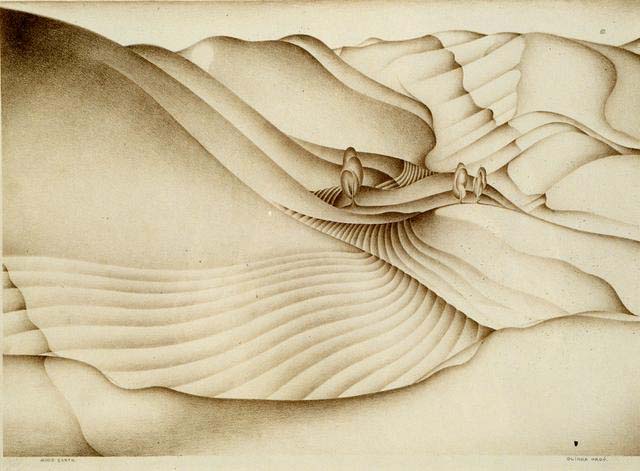 When you dig into the ground under the grass in your yard, you will find soil. But what happens if you keep on digging? If you dug far enough, would you run out of soil? How far would you have to dig before you ran out? And what would you find there?

If you dug far enough, you would hit solid rock. This is called bedrock. But before you got there you would have to dig though three different layers of soil. The layers are known as horizons, and all the layers together make up the soil profile. The first layer would be nothing but dark-colored organic materials. That is the layer formed by plants and insects that have died and dead leaves that have fallen. Just under that is the topsoil. The topsoil is the best place for plants to take root and grow. It is a mixture of air, water, organic material (matter from dead plants and animals) and minerals (sand, clay, silt).

In most places the topsoil is between six and 20 inches thick. The subsoil is the layer below the topsoil. It is made mostly of clay or sand and has very little organic material. Plants have a hard time growing in subsoil. Between the subsoil and the bedrock are a layer of small rocks that have started to break off the bedrock. This layer is the parent material of the soil. That's because most of what makes up the soil was once part of the rock.

Soil covers much of the land on Earth. It provides a substrate for plants (Roots anchor in soil.), a source of food for plants, and a home for many animals (insects, spiders, centipedes, worms, burrowing animals, bacteria, and many others). Soils are home to two or more tons of living things per acre. Microflora, insects, worms and animals, as well as other organisms, produce acids that, in turn, help break down soil minerals. Organic matter is beneficial to soils. It increases water-holding capacity, serves as a reservoir for plant nutrients such as nitrogen, and provides food for the living things in the soil.

Minerals have several different ways of getting into the soil. Sometimes they come from the ashes of volcanoes that have erupted. Usually the minerals come from rocks that have been broken apart. Water from rain flows into the cracks of rocks. When the water freezes, it expands and causes the cracks in the rocks to get bigger and little bits of rock break off. Sometimes the roots of trees and deep-rooted plants grow into the rocks and draw the minerals up through the roots and into the plant. The minerals become part of the leaves that later fall to the ground. Many rocks are broken apart by lichens â tiny plants that live on rocks. Sometimes water just keeps running over the rock until tiny particles start to wash away. We call all these processes "weathering." Water and wind carry the tiny bits of rock along until they get trapped by the soil. It can take hundreds of years for rocks to break into pieces that are small enough to form soil. It takes between 200 and 500 years for just one inch of topsoil to form.

Dirty Pictures
Grades K-2: ELA, Science, VA
Students conduct experiments with soil, explore the different colors and textures found in the soil and use soils of different colors to create art.
Save Our Soil: Exploring Agricultural Land Use
Grades 6-7: ELA, Geography
Students will learn about the distribution of agricultural land through a demonstration with an apple representing the earth. Students will discuss the impacts of land development. Students will make land use decisions for a variety of situations and justify their decisions. Students will answer questions from a chart showing land use and ecosystem types in select countries from different regions.
Mighty Earth Movers
Grades PreK-3
Students will create a worm habitat and keep a journal to monitor changes. They will observe the worms and measure them.

Soils are distinguished by observing the percentage of each of the three types of particles. These mixtures are called loams. If soil has more sand it is a "sandy loam," more silt, a "silty loam," or more clay, a "clay loam." Soils vary in their ability to be cultivated. The combination of particle types dictates how the soil will handle, drain and hold water.

Clay loams hold water tightly, but they drain poorly. Clayish soils are sticky. Plants growing in clay may suffer from a lack of air around the roots because the tiny clay particles absorb so much water. Clay soils drain poorly and prevent plants from getting the needed water around their roots.

Sandy loams provide enough air to the roots because the particles are large; however, sand does not hold water well, and it drains quickly. The water becomes unavailable to thirsty plants. Plants in sand soils need to be watered frequently.

Silty loams can be found around water sources. It is generally the soil that is carried in by flooding and then left in the drying process. This soil can collect organic materials and nutrients and store them in the existing soil.

The best growing soils combine the airiness and drainage of sand with the water-holding capacity of clay. Loam soils that contain approximately 40 percent sand, 40 percent silt and 20 percent clay are considered the best cultivating soils.

"The crust of the earth is a vast museum."
-Charles Darwin

Soil formation is influenced by five factors: geology (parent material), topography, climate, plants and animals (organic material), and time. These factors give soil profiles their distinctive character. Color, texture, size and shape of soil aggregates, kind and amount of rock fragments, distribution of plant roots, pH, and other features are used to characterize soils. After a soil is described and its properties are determined, soil scientists assign the soil to one of 12 taxonomic orders and/or one of many suborders.

The Natural Resources Conservation Service (NRCS) has identified and mapped over 20,000 different kinds of soil in the United States. They come in a wonderful range of hues, from black to yellow to deep red.

Port silt loam, our state soil, is the most common soil in Oklahoma and is present in at least 33 counties. It is very productive and is used to grow a wide range of cropsâcotton, wheat, sorghums, oats and others. Port silt loam is dark brown to dark reddish brown and is derived from upland soil materials weathered from reddish sandstones, siltstones and shales. The natural soil supports a native, undisturbed vegetation of tall prairie grasses and native trees, including pecan, walnut, bur oak and cottonwood.

Soil erosion is what happens when soil is washed or blown away. The slope of the land, the climate and the texture of the soil all play a part. In places where the land is covered with plants such as grass or trees, erosion takes place so gradually that the new soil is formed before erosion has time to occur.

That is not the case in places where the soil has little or no plant cover. The Grand Canyon is a very familiar example of erosion by water. Most of the erosion there was the work of nature rather than humans. In that part of the country the hot, dry climate makes it difficult for plants to grow. The soil is sandy. Sand particles don't stick together very well, so they wash away easily. The land around the Grand Canyon slopes into the Colorado river, and that also makes erosion more likely.

Heavy rains cause soils to erode away in many parts of Oklahoma where the land slopes and the soil is unprotected. One of the best examples of wind erosion in Oklahoma is the Little Sahara State Park in Major County. Windy conditions, sandy soils and sparse vegetation are the cause of the erosion there.

Keeping soil healthy is very important to farmers. For that reason, careful farmers do their best to protect their soil. The best way for farmers to do this is to keep their fields covered with vegetation at all times. Plant cover provides a cushion against the beating force of the rain and also slows the wind at the soil's surface.

Some farmers protect their soil by leaving stubble or residue in their fields after they have harvested their crops. Other farmers plant their fields with grass or cover crops during seasons when they are not growing their main crop. Alfalfa, clover and field peas send roots deep into the soil and help hold it in place. Those crops also fix nitrogen from the air and make it available to the soil. When it is time to plant, the farmer will turn the stubble or cover crops under to add extra organic matter to the soil. The organic matter, in turn, helps the soil hold together and soak up moisture rather than wash away. 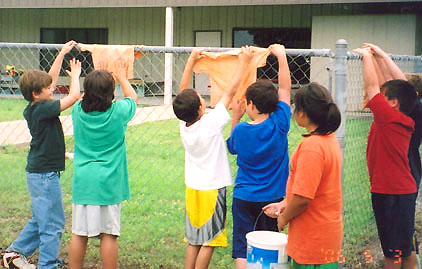 Oklahoma Dirt Shirt
Let It Rain
Grades 3-5: Science
Students will conduct experiments to demonstrate erosion and create a publication with photographic examples of erosion in your area.
Modifying the Plow
Grades 3-5: Sci, SS, ELA, Visual Arts, Math
Students will learn how plows have been modified through the years to improve their use and impact on farming. Students will read about the Dust Bowl and discover how Oklahoman Fred Hoeme's modification of the plow helped reduce wind erosion. Students will design a plow replica using a variety of supplies and then test the effect the plow has on a tray of soil. Students will use the elements and principles of design to analyze artwork that portrays plowing fields. Students will discuss the artists portrayal of plowing a field.
Mud in the Water
Grades 5-6, 8
Students will learn about soil erosion and water pollution by building a demonstration model from pop bottles and observing the movement of materials representing pollutants from soil into water. 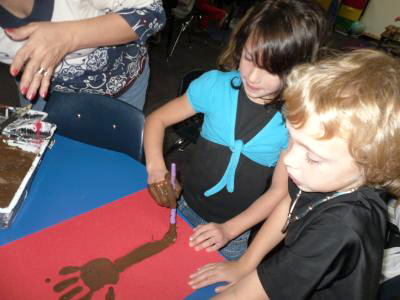 Good Earth, lithograph, 1938 by Olinka Hrdy
Agriculture in Art
Olinka Hrdy is one of Oklahoma's first modern artists. She was born in 1902 near a small Czechoslovakian settlement in Prague, Oklahoma. She considered herself a "soddy," that is one who was born and grew up in a sod house. Olinka, Czech for "Olive," was of Czechoslovakian descent. After her parents divorced, she and her mother worked a large Sac and Fox lease near Prague. They tilled several hundred acres on their own. She remained there until she left to attend the University of Oklahoma.
She arrived at the University of Oklahoma with only fifty dollars for the entire year. Befriended by art faculty, she was given opportunities to paint her way through school with mural projects. After spending most of her career in New York and California, she returned to Oklahoma in the 1960s.