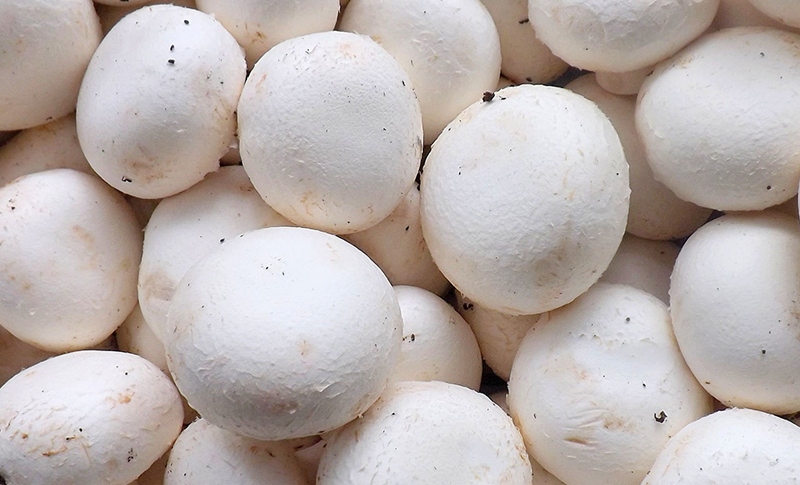 Mushrooms are the fruiting bodies of certain fungi. They occur in all environments on the planet. Some mushrooms are parasitic. They colonize living trees or plants, extracting nutrients until the host slowly dies. Saprophytic mushrooms live off organic matter that has already died and begun to decay.

Mushrooms like to live in dark, damp places. They feed off the decaying matter around them. As the mushroom grows, it develops spores. New mushrooms grow from these spores. The spores are so tiny you can't see them without a microsope. Millions of spores together look like fine powder. A mature mushroom will form as many as 16 billion spores.

When the spores are ripe they shoot out of the mushroom and drift away in the wind. If they land in a dark, damp place with a food source, they will grow into new mushrooms. First, they develop a threadlike structure called a hyphae. A large number of hyphae grow together and form the mycelium. The hyphae and mycelium grow under the surface where you can't see them. The fruiting body is the part of the mushroom that appears above ground. When it first appears, it looks like a little button. Because the mycelium of many kinds of mushrooms tend to grow in a circular pattern, the mushrooms often grow in a circle or ring. People long ago called them "fairy rings" because they thought they were made by fairies dancing through the night. Some believed mushrooms were created by thunderbolts because wild mushrooms appear after storms.

The fruiting part of the mushroom that we see is only a small part of the mushroom. The entire body of a mushroom is usually spread out over a large area. In nature some species of mushrooms may have a body that spreads over hundreds of square miles. A population of honey mushrooms in the Blue Mountains of eastern Oregon was found to be the largest single organism in the world, spanning 2200 acres.

There are 38,000 different varieties of mushrooms, with 3,000 in North America. Not all mushrooms are edible. In fact, some mushrooms are poisonous, so you should NEVER EAT MUSHROOMS growing in the wild.

Mushrooms were first cultivated in Southeast Asia. Mushroom farming first started in the US in 1896 in Kennett Square, PA. Two florists, William Swayne and Harry Hicks, wanted to make use of empty space under the shelves where they grew their flowers. Flowers need sunlight, but it was very dark and damp under the shelves. They couldn't grow flowers there, but they could grow mushrooms, since mushrooms don't need sunlight to grow.

The Portobello mushroom is a large brown strain of the same fungus as the button mushroom, left to mature and take on a broader, more open shape before picking. Portobello mushrooms are distinguished by their large size, thick cap and stem and a distinctive musky smell. Portabello mushrooms serve as a substitute for meat in some recipes because they have a similar texture.

The shiitake (she-TAH-kee) mushroom is large and brownish to very dark brown and has a fleshy cap from about 1 to 2 inches across. Shiitake are easily dried, convenient to use and inexpensive to store and transport. The shiitake mushroom is native to Japan and China and grows naturally on fallen oak logs in the spring and autumn. Shiitake is from the Japanese shii for oak and take for mushroom. In China it is also called the hsaing ku, meaning fragrant mushroom. Shiitakes are the second most-consumed mushrooms in the world, after the button mushroom. In Asia it is number one. Shiitake mushrooms are Japan's number one agricultural export. Shiitake can be grown either on hardwood logs like oak or on a special combination of oak sawdust, bran, millet and other additives. In Oklahoma, Lost Creek Farms in Perkins produces shiitake mushrooms and shiitake mushroom log kits for people who want to grown their own. Logs usually average 4-6 inches in diameter and 40 inches in length. Spawn, or mycelium, is placed in pre-drilled holes. Wax is melted and dripped over the hole to form a seal.

Although a mushroom is not a true vegetable, the National Agricultural Statistics Service (NASS) includes mushrooms in the vegetable category for statistics purposes. Mushrooms are a good source of potassium. The US is the second largest producer of mushrooms, following China.

Decomposition is a fundamental process on which all life depends. When a plant or an animal dies, the energy stored in them is not lost. Bacteria, fungi and other microscopic organisms produce special enzymes to break down dead plants and animals so they can use them as food. These organisms, called decomposers, live in the soil, air and water. They are nature's recyclers.

Fungi is one important decomposer. Fungi is a major kingdom of living things. They do not have chlorophyll like plants, so they can't photosynthesize their own food. Like other decomposers, they rely on other plants for their nutritients.

All fungi have a vegetative body called a thallus or soma, composed of hyphae. The hyphae typically form a microscopic network within the mycelium, through which food is absorbed. Usually the most conspicuous part of any fungus are its fruiting bodiesâreproductive structures that produce spores.

Some fungi are used in medication. Penicillium is a fungus that kills harmful bacteria in the human body. Yeast is a useful fungus used in bread-making and for making beer and wine.

Books
Farrell, Jeanette,Â Invisible Allies: Microbes That Shape Our Lives, Farrar, Strauss and Giroux, 2005. (Young Adult)
Broad-ranging book on the beneficial roles of microbes. Considers benefical microbes in the production of bread, cheese and chocolate as well as their vital role in the gut, where they break down certain foods, kill harmful microbes and enable certain genes in the intestines to maximize digestion. Also explains the process by which microbes dispose of human waste in sewage treatment plants.
Nardi, James B.,Â The World Beneath Our Feet: A Guide to Life in the Soil, Oxford, 2003. (Grades 4-6)
How soil is formed, symbiotic relationships between plants and lichens, algae, bacteria and fungi with an examination of more than 100 kinds of subterranean organisms. Also profiles soil, microbes, invertebrates and vertebrates. Entries describe the distinctive physical and behavioral characteristics or organisms, where they are found, their diets, feeding methods and roles in the ecosystem. Sidebars provide common names, scientific classification, ecological function and more.