Oklahoma's Native American population is the largest in the United States. Up to 67 different tribes are represented here. At least three tribes, the Caddo, Wichita, and Osage, were growing corn, beans and squash along Oklahoma's river bottoms as many as 400 years ago. The people who populated the area around the ancient Spiro Mounds were also farmers, part of a large civilization that extended into the Easter Woodlands. Other groups of people started migrating here on horseback from the Northern Plains about 200 years later to hunt bison. Many of the tribes were moved here forcibly from their ancestral homes east of the Mississippi River to make room for European settlers who were moving west.

The Cherokee, Choctaw, Chickasaw, Seminole and Muscogee/Creek originated in the Eastern Woodlands of the US - millions of acres of primeval forests. Before they were farmers, they moved from one part of their home range to another, taking advantage of the seasonal availability of grasses, fruits, nuts, fish and game.

Around 4,000 BC shoals and lakes began to develop, and the abundance of wild seed plants, shellfish, fish and animals such as deer and raccoon encouraged people to settle down in permanent river valley settlements. For thousands of years, women had collected wild plants studied the life cycles and habits of the nut trees and seed plants. Now in the rich soils of their permanent settlements, they began to experiment with plant domestication. Sunflower, marsh elder, goosefoot and wild gourd were most successful. They produced highly nutritious seeds and provided a dependable food supply that could be stored for late winter use. Other crops included goosefoot, erect knotweed, little barley and maygrass

Three beautiful women came to their dwellings on a snowy night. One was a tall woman dressed all in yellow, with long flowing hair. The second wore green, and the third was robed in orange. The three came inside to shelter by the fire. Food was scarce but the visiting strangers were fed generously, sharing in the little that the people had left. In gratitude for their generosity, the three sisters revealed their true identities-corn, beans, and squash-and gave themselves to the people in a bundle of seeds so that they might never go hungry again.
- from Kimmerer, Robin Wall,Â Braiding Sweetgrass: Indigenous Wisdom, Scientific Knowledge and the Teachings of Plants, Milkweed, 2015.

Three Sisters
Grades 3-5 ELA, Sci, SS, Health
Students will learn about the American Indian agricultural practice of Three Sisters planting. They will track food choices and make healthier food choices by eating more vegetables.
Cherokee Farming
Grades 3-4: ELA, SS, Sci
Students read about farming among the Cherokees and compare farming before and after the removal to Indian Territory from their home lands in the east. Students will make a timeline of the foods adopted by the Cherokee. Students will research to learn more about the Cherokee. Students will conduct experiments with heirloom seeds.
Choctaw Farming
Grades 3-4: Social Studies, Science
Students will read about farming among the Choctaw. Students will examine contributions of different cultures to Choctaw agriculture. Students will work together to develop imaginary bean hybrids.
Plows on the Hunting Grounds
Grades 9-12: ELA, Social Studies
Students learn about the Indian Allotment Act of 1887, which paved the way for opening Indian land to homesteading.
Potawatomi Farming
Students will read about early farming among the Potawatomi people and compare two stories about maple syrup. Students will learn that maple syrup is not sweet when it comes from the tree and conduct an experiment to find what percentage of sugar makes a substance taste sweet. Students will evaporate sugar water to demonstrate how the sap from a maple tree can become sugar.
Spiro Farming - Corn, Squash and Beans Build a Mighty Trade Center
High School: Social Studies, ELA
Students will read about farming practices among the people who populated the area around Spiro Mounds. Students will research to learn more about Spiro culture and other prehistoric farming cultures in Oklahoma. Students will identify the region in the US occupied by Mississippian culture. Students will trace the trade route along rivers and tributaries that joined Spiro with Mississippian ceremonial centers back east. Students will design experiments to demonstrate how agriculture might have started.
Thanksgiving - Celebrating the Harvest
Grade 4-5: SS, ELA, Sci
Before the Pilgrims had their famous Thanksgiving feast in 1621, native people all over the continent had been holding their own feasts of thanksgiving for the harvest for thousands of years.
Red Dirt Groundbreakers
Resource: Pioneer Indian Agriculture in OklahomaÂ (Chronicles of Oklahoma) 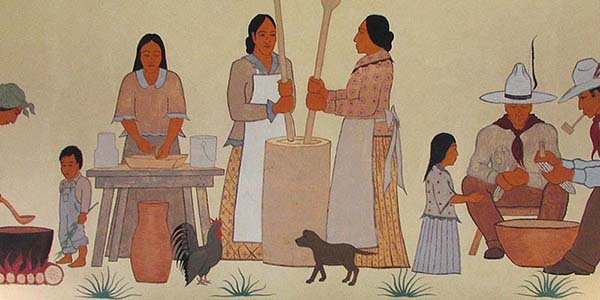