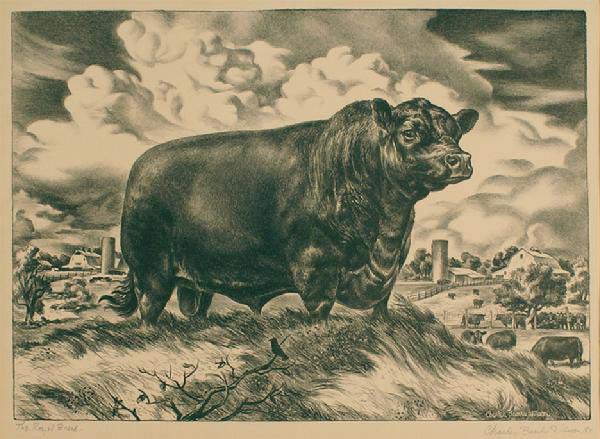 Charles Banks Wilson spent his childhood in Miami, Oklahoma. A painter, printmaker, teacher, lecturer, historian, magazine and book illustrator, Wilson's work has been shown in over 200 exhibitions in the United States and across the globe. Many of Wilson's works hang in the Oklahoma State Capitol. These include life-size portraits of Will Rogers, Sequoyah, Jim Thorpe and Senator Robert Kerr.

One major undertaking was creating murals for the Oklahoma Capitol depicting the state's discovery, frontier trade, Indian immigration, settlement, and overall history. The murals hang under the Capitol dome.

In addition to being the author and editor of a standard work on the Indian Tribes of Eastern Oklahoma, Wilson is also the illustrator of 22 books and has contributed illustrations to many more. Children attending Oklahoma schools studied from a history textbook that contained over 50 of his drawings. Writers have said that the paintings by Charles Banks Wilson breathe the spirit of the southwest.

In an interview in 2010 with John Erling of Voices of Oklahoma, Wilson described drawing the bull depicted in the litograph:

"I wanted to draw him, and he didn't want me to draw him. So when I would start to draw him, he would lower his head and start walking toward me. The fellow that took care of him said, "Well, I can take care of that." So he went over to the next field and got a female and brought her over and put her on the other side of the fence. Then the bull raised his head up and his eyes raised up and he posed for me."