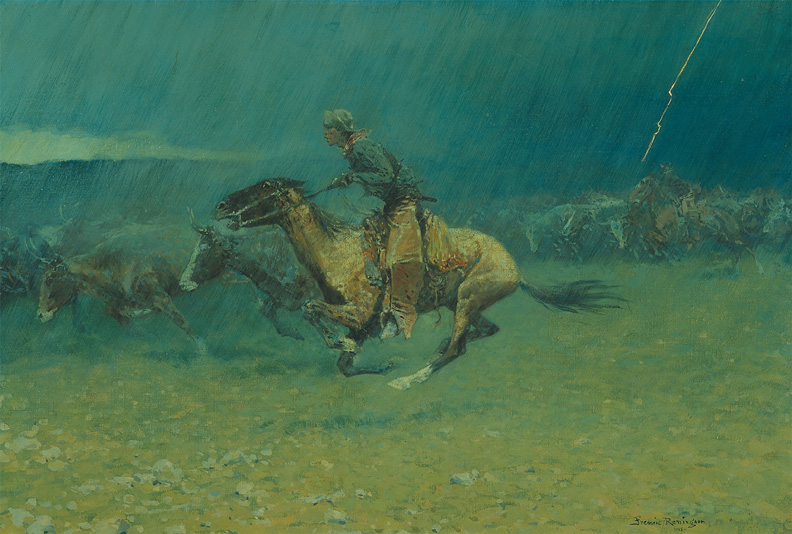 Frederic Sackrider Remington (October 4, 1861 - December 26, 1909) was an American painter, illustrator, sculptor, and writer. As a young man, he traveled widely throughout the country, spending most of his time sketching the people and places in the new American frontier. In 1886 he established himself as an illustrator of Western themes, and sold his work to many of the major magazines of the time including, Harper's Weekly. While most of his best known work was in illustration, he was also a fine painter, capturing on his canvases the sweeping vistas, heroic figures, and moments of danger and conflict that came to define the archetypal romance of the West.

By 1900 Remington had begun to experiment with impressionism. The Stampede was painted during this period. His painting at this time showed a rejection of the crisp linear illustrator style he had used previously. Instead he began to concentrate on mood, color and light - sunlight, moonlight, and firelight. This painting is part of the permanent collection at theÂ Gilcrease MuseumÂ in Tulsa.

He knew the West as only few have known;
He knew the men, he knew the horses, too;
The swarthy, silent trapper, all alone,
The cowman--and he knew what they could do.
The range to him was an open book;
The peaks and crags and hills--he knew them well;
He knew the secrets in each canyon brook,
And what the great plains whispered he could tell.
At his deft touch the canvas sprang to life;
It glowed with all the colors of the West;
His paint-tubes told the horrors of the strife--
The charge, the savage warwhoop and the rest.
He showed the white-topped wagons, jolting on;
The grim and hardy plainsmen as they rode;
The campfire in the gray of early dawn;
The pack-train with its lashed and swaying load.
He knew the cattle and the brands they bore;
He drew them with a keen and master hand;
He saw and saved to us the West before
There passed the remnants of that valiant brand.
He gave to us the cowboy--carefree, brave;
The riders of the range he pictured true;
'Twas left for him their herds and them to save,
Ere they had passed forever from our view.
A monument to him who knew the West!
Whose brush so deftly told its every tale;
The horses and teh men he loved best,
When he, too, rode the dusty cattle trail.
A shaft to him whose canvas gleams and glows
with colors of the life he loved so well;
And from whose painted pictures ever flows
A charm which weaves o'er us a magic spell!
A. A. Brininstool, Trail Dust of a Maverick, 1914