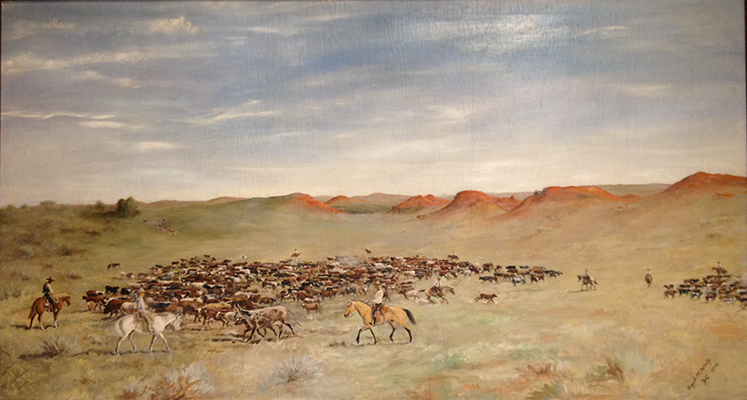 Known as "the Sagebrush Artist," Augusta Metcalfe used oils and watercolors to render images that depicted her first-hand knowledge of ranch life in Oklahoma's early years. After moving from Pennsylvania to Illinois to Kansas, where Augusta was born, her parents brought the family to Oklahoma. In autumn 1893 her family claimed a homestead acreage at the mouth of Turkey Creek on the Washita River near present Durham, in Roger Mills County. On this 640 acres Metcalfe lived the rest of her eighty-nine years.

In 1905, two years after her father's death, Augusta married James Metcalfe. Three years later Metcalfe left his wife with an infant son and an invalid mother. The strong, determined young woman continued to perform the ranch operations: stringing fence wire, planting, harvesting, roping and branding, and then cooking evening meals on her wood stove. At the end of the day, she sketched what she had seen. With her drawing and painting, Metcalfe chronicled life in the state's early-day cattle country. She had no formal training. This painting depicts the Shaw Ranch in Roger Mills County, near Metcalfe's home.

Critics thought her paintings had too much detail, but Metcalfe knew her subject well and was determined to make her pictures real. Her paintings have been displayed in the Grand Central Station Art Galleries in New York, the Nelson-Atkins Museum in Kansas City, and at the Philbrook Museum of Art in Tulsa.