If you have cotton fields in your area, now would be the time to get cotton bolls.

Cotton batting is cotton fiber from the cotton plant which has been wadded into rolls or sheets. Batting serves as the middle layer in quilts. In some quilts that are very old you can still feel the seeds and twigs from the cottton plant between the quilt layers. 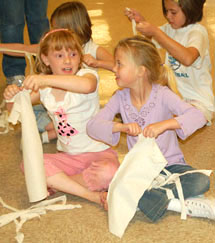 Students will develop number sentences from this fact about cotton: "215 pairs of jeans and 1,217 T-shirts can be made from a bale of cotton." 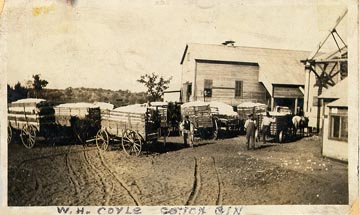 Books
Denenberg, Barry,Â So Far From Home: The Diary of Mary Driscoll, An Irish Mill Girl, Lowell Masachusetts, 1847, Scholastic, 2003. (Grades 4-7)
Fourteen-year-old Mary Driscoll and her family have lived in terrible poverty in the Irish countryside since the potato famine began several years ago. When Mary is offered a chance to join her aunt and older sister in America, she jumps at the chance to seek a better life. She takes a job in a textile mill in Lowell, Masachusetts, where she is scorned by most of the American workers and expected to work long hours under terrible, unsafe conditions.
Gunderson, Jessica, and Jerry Acern,Â Eli Whitney and the Cotton Gin, Capstone, 2007. (Grades 1-7)
Uses comic book-style word balloons and sophisticated vocabulary to tell the story of Eli Whitney and the invention of the cotton gin. Explores the impact the cotton gin had on the Civil War and the ultimate emancipation of the slaves. Includes a timeline of advances made by Whitney, a glossary and a recommended reading list.
Hamilton, Virginia,Â The People Could Fly: The Picture Book, Knopf/Random House, 2005. (Grades 3-5)
A group of African slaves working in cotton fields in America escape an abusive overseer through magic recalled from Africa.
Hopkinson, Deborah, and James E. Ransome,Â Under the Quilt of Night, Aladdin, 2005. (Grades K-5)
Traveling late one night, a runaway slave girl spies a quilt hanging outside a house. The quilt's center is a striking deep blue - a sign that the people inside are willing to help her escape. Can she navigate the complex world of the Underground Railroad and lead her family to freedom?
Hopkinson, Deborah,Â Up Before Day Break: Cotton and People in America, Scholastic Nonfiction, 2006. (Grades 4-8)
Using primary sources and extended with black and white photos and period reproductions, this book provides a detailed picture of the effect of cotton production on the social structure of the US. From 1607, when the earliest English settlers arrived in Virginia, cotton was among the plants grown in colonial gardens. With the onset of the Industrial Revolution in England the demand increased, and the southern colonies stepped up production. Hopkinson explores the role of cotton production in the system of slavery and also considers the young women who worked in the textile factories. After the Civil War, the southern economy traded slavery for sharecropping and moved many of the mills were moved to the South. Following workers' histories up through the Great Depression, the final chapter discusses child labor, past and present.
Paulsen, Gary,Â The Quilt, Random House, 2005. (Grades 3-8)
A young boy learns the stories of his Norwegian American family as told through a quilt created by women left at home during wartime in 1944.
Woodson, Jacqueline, and Hudson Talbott,Â Show Way, Putnam, 2005. (Grades K-5)
A Show Way is a quilt with secret meanings, and the image works as both history and metaphor in this picture book. Based on Woodson's own history, the story is of African American women across generations, from slavery and the civil rights movement to the present. Growing up on a plantation in South Carolina, Soonie learns from Big Mama about children "growing up and getting themselves free," and also how to sew quilts with signs that show the way to freedom.