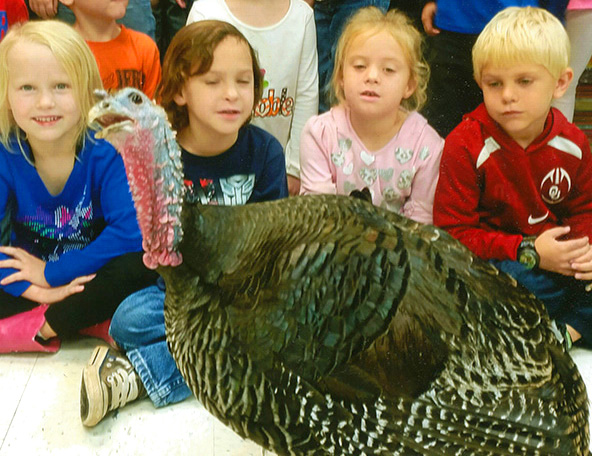 This old road is hard and bumpy
Our new turkey's wild and jumpy.
Careful, driver, not so jerky
Or you'll make us spill our turkey.

Some farmers grew turkeys on their farms in 1907, the year Oklahoma became a state, but most people probably went out hunting for wild turkey for their Thanksgiving tables. In fact, wild turkeys were nearly wiped out in the early days of statehood because of the influx of people. By 1925, most people thought they were extinct. In the late 1940s the Oklahoma Department of Wildlife Conservation embarked on a stocking program to reestablish the wild turkey to its former range. This program was so successful that today we have huntable populations in every county.

Although bison had been all but exerminated on the Southern Plains by the 1880s, other populations of wild game were relatively plentiful. In Rufus F. Zogbaum's "Running the Wild Turkey in the Indian Territory," a hunter armed with a lasso rides after a large bird flushed from the trees. Hunting for sport became popular in the territories in the 1890s. (from "Picturing Indian Territory," special exhibition at Fred Jones Museum of Art, Norman)

Hunting Turkey in the Territory

Early in the morning, the spring followed the opening, we often heard the "gobble, gobble" of a wild turkey a short distance from our claim. Desiring to add to the family larder, I had the old gun loaded with coarse shot ready for the next warning. Sure enough, a few days later Father called me about daybreak saying "The old gobbler is calling you." Hopping out of bed, scantily clad, I grabbed the gun and started toward the object of my quest. Knowing the terrain of the land, I judged the bird was near a gully, from which a close approach was possible. Soon I came near the object of my search. I waited for his "gobble, gobble" and located an object moving through the half burnt grass and scrub oak. Feeling sure it was the turkey I took aim and fired. Climbing from the pit, I was horrified to see a man standing where I believed the turkey was strutting. I ran up to him and asked if he was hurt. Lowering his trousers, we observed small trickles of blood from the gun shot wounds. My aim was perfect for the intended victim. He replied that he did not think that the shot was serious, however. I offered to get a doctor but he declined. Unknown to each other, both of us were stalking the turkey, which escaped unharmed.

Turkeys and the Pilgrims

"Turkeys were by no means a novelty to the Pilgrims. When the conquistadors arrived in Mexico in the sixteenth century, they discovered that the Indians of Central America possessed domesticated turkeys as well as gold. The birds were imported to Spain as early as the 1520s, and by the 1540s they had reached England. By 1575, the domesticated Central American turkey had become a fixture at English Christmases. The wild turkey of New England was bigger and much faster than the birds the Pilgrims had known in Europe and were often pursued in winter when they could be tracked in snow."

Benjamin Franklin on the Turkey

"...Others object to the Bald Eagle as looking too much like a Turkey. For my own part, I wish the Bald Eagle had not been chosen as the Representative of our Country; he is a Bird of bad moral Character. For in truth, the Turkey is in comparison a much more respectable Bird, and withal a true original Native of America. Eagles have been found in all Countries, but the Turkey was peculiar to ours...He is, though a little vain and silly, it is true, but not the worse emblem for that, a Bird of Courage, and would not hesitate to attack a Grenadier of the British Guards, who should presume to invade his Farmyard with a red coat on."

Dark meat, which avian myologists (bird muscle scientists) refer to as "red muscle," is used for sustained activityâchiefly walking, in the case of a turkey. The dark color comes from a chemical compound in the muscle called myoglobin, which plays a key role in oxygen transport. White muscle, in contrast, is suitable only for short bursts of activity such as, for turkeys, flying. That's why the turkey's leg meat and thigh meat are dark, and its breast meat (which makes up the primary flight muscles) is white. Other birds more capable in the flight department, such as ducks and geese, have red muscle (and dark meat) throughout.

Turkey Facts
Books
Arnosky, Jim,Â All About Turkeys, Scholastic, 2008. (Grades 2-4)
Information-packed book details the life and habits of the wild turkey, including what it eats, how it raises its young and where it is found. Inserts of text and pictures provide detail on each topic.
Arnosky, Jim,Â I'm a Turkey!, Scholastic, 2009. (Grades PreK-3)
Humorous song, filled with factual information about turkeys.
Stone, Tanya Lee, and Gerald Kelley,Â T is for Turkey: A True Thanksgiving Story,Â Price Stern Sloam, 2009. (Grades PreK-2)
The elementary school puts on a play that tells the story of the first Thanksgiving. Rhyming couplets that flow through the alphabet help kids celebrate everything from harvest to Pilgrims to turkey.
White, Linda, and Megan Lloyd,Â Too Many Turkeys, Holiday House, 2011. (Grades 1-3)
After a little lost turkey wanders onto Belle and Fred's farm, Belle's garden becomes the most beautiful one in the neighborhood. Everyone wants to know her secret, but Belle won't tell. Then, while she is out of town, another turkey comes to roost on the farm - and then another and another, until the whole farm is overrun. Fred is at his wit's end when his neighbor