The leaves are falling, and so are the pecans

Pecans start falling from Oklahoma trees this time of year. In 2016, pecans ranked number 12 in value of all Oklahoma commodities, and Oklahoma ranked number 5 in the nation in the production of pecans.

Pecans and other nuts are loaded with unsaturated fat and essential nutrients. The U.S. Department of Agriculture recommends eating three to five servings of nuts, seeds or legumes a day. One ounce of pecans (20 to 30 halves, depending on the pecan size) equals one serving. Pecans can also help with weight loss because they help you feel full.

If you can find a pecan tree and a willing owner nearby, take your students outside to gather pecans, and use them in these lessons.

Develop an advertisement for Oklahoma pecans. 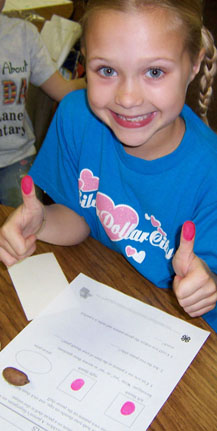 Pecan Fingerprints
Pecan Fingerprints
Students learn about themselves as individuals and understand that things in nature also have traits that distinguish them from all others.
A Tough Nut to Crack
Students evaluate the quality of pecans based on a set of criteria.

Okmulgee owns the world record for largest pecan pie, pecan cookie, pecan brownie, and biggest ice cream and cookie party. Each June, Okmulgee rolls out the welcome mat to thousands of its closest friends as the annual Pecan Festival comes to town.

Books
Goodman, Barbara,Â The Missing Pecan, AuthorHouse, 2004. (Grades PreK-2)
Two young squirrels race each other to see who can find the most pecans and make it back home first with them. Unable to carry all of them, one of the squirrels hides one of his nuts and plans to come back later. Good intro to trees and their growth process.
Kelly, Jacqueline,Â The Evolution of Calpurnia Tate, Henry Holt, 2009. (Grades 5-8)
Growing up with six brothers on a Texas cotton and pecan farm in 1899, 12-year-old Callie prefers to spend her time exploring the river, observing animals and keeping notes on what she sees. Her love of nature creates a bond with her grandfather. After they discover a previously unknown species of vetch, he attempts to have it officially recognized. Through this experience she decides she wants to be a scientist, although societal expectations make this dream seem impossible. Interwoven with the scientific theme are threads of daily life in a large family growing up on a farm.
Stewart, Edna,Â The Call of the Christmas Pecan Tree, Dorrance, 2008.
In a small town by the seashore stands a lonely-hearted pecan tree. Though the tree has long received love and attention from the people of the town, it is scheduled for removal, and town is thrown into turmoil.
Tafolla, Carmen, and Sharyll Tenayuca and Terry Ybanez,Â That's Not Fair!/No Es Justo!: Emma Tenayuca's Struggle for Justice/La lucha de Emma Tenayuca por la justicia,Â Wings, 2008. (Grades 2-6)
Picture book biography in English and Spanish relates the struggle of Mexican American farmworkers in the early 20th Century through the perspective of Emma Tenayuca, who became a labor activist. Growing up in San Antonio in the early 20th Century, Tenayuca was shocked by the inequality around her, comparing her comfortable home with the extreme poverty of factory and farmworkers. She spoke in public about the plight of the pecan shellers in the factories and led 12,000 workers in a strike that forced factory owners to raise wages. Includes a chapter on child labor.