Oklahoma Vegetable of the Month: Pumpkin 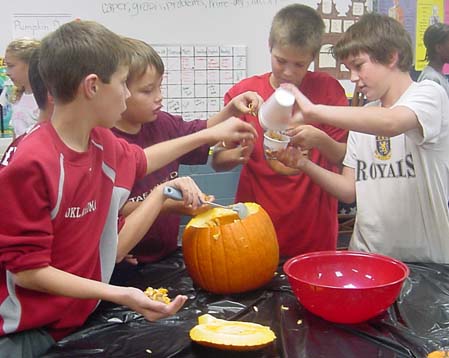 Pumpkin is definitely an October food, since 80 percent of the pumpkin supply in our country is available in October. Since the most common way to eat them is in pie, most of us think of pumpkins as fruit, but the pumpkin is actually a vegetable - a cucurbit - like squash, cucumbers and watermelon.

Pumpkins were an important crop to some of the first known residents of present Oklahoma, the Wichita people who were settled along the Red River when European explorers and traders first encountered them in present Oklahoma.

Pumpkin Lessons and Resources
Pumpkins by the Pound

Here's a great way to combine our fruit and vegetable of the month:

Play With Your Food: Pumpkin Globe

(From Illinois Ag in the Classroom) 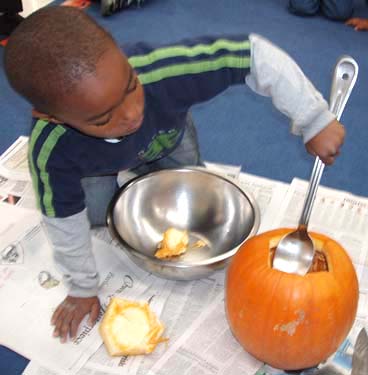 Play With Your Food: Pumpkin Guts

Helpful tip to make jack-o-lanterns last longer: Spray a mixture of bleach and water on the inside of your pumpkin daily, or coat the inside with petroleum jelly to keep mold and dehydration at bay.

Be a Food Explorer: Pumpkin Soup

For pottage and puddings
and custards and pies,
Our pumpkins and parsnips
are common supplies,
We have pumpkins at morning
and pumpkins at noon,
If it were not for pumpkins
we should be undoon.
âPilgrim verse, circa 1630

Your students will be most familiar with pumpkin as a dessert, in the form of pumpkin pie or pumpkin bread. As desserts go, pumpkin pie is one that is actually good for you, but help your students think of pumpkin as a vegetable by preparing and serving pumpkin soup. This recipe, fromÂ The Joy of Cooking, makes use of ham, in celebration of National Pork Month. 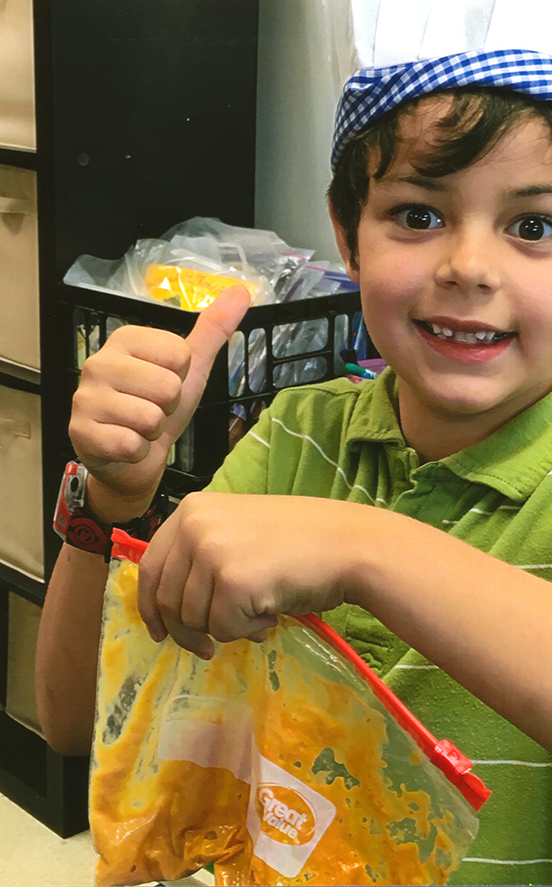 Pumpkin Pie in a Bag

And if you can't wait for Thanksgiving to have pumpkin pie, tryÂ Pumpkin Pie in a Bag.

Herbert Hoover and the The Great Pumpkin Wars

My uncle always raised a large quantity of pumpkins to feed the dairy cows. These would be brought in from the fields and piled in a pyramid, as much as twenty feet high by fifty feet, or more, long. We were allowed to do whatever we liked with all the pumpkins, as long as we cleaned up the debris at the end of the day and placed it in the troughs for the cows when they came home out of the woods at milking time. So we made "Jack-o-lanterns" of every sort our fancy could conceive, and arranged them by companies and battalions and brigades. Then we attacked them, foot and horse, with a corn-cutter, a weapon like a machete or a Circassion sword, and annihilated the whole army. There was no limit to the slaughter save from physical exhaustion with the rather hard chopping. It seems to me I had a companion in those battles, but his face is veiled to me now; it was probably Herbert Clark Hoover.

amounts per serving
% daily value
calories
20
calories from fat
5
total fat
0g
0%
sodium
0g
0%
total carbohydrate
4g
1%
dietary fiber
1g
0%
sugars
2g
protein
1g
Vitamin A
4%
Vitamin C
8%
calcium
2%
iron
2%
Percent daily values are based on a 2,000 calorie diet.
Books
Duke, Kate,Â Ready for Pumpkins, Alfred A. Knopf, 2012. (Grades K-2)
Hercules is a first-grade rodent, in a multilayered tale about time, the seasons and the long, impatient wait for a full-grown pumpkin to pick. When the teacher takes Herky to her country home for the summer, he discovers his horticultural side. Especially marvelous is what Herky's accomplishment shows children: animals and plants have lives and life cycles of their own. (New York Timesreview)
Farmer, Jacqueline,Â Pumpkins, Charlesbridge, 2004.
Facts, history, legend, and growing tips about one of the favorite fruits of fall. In addition to instructions on pumpkin carving (and safety) and seed toasting, the author includes the word for the berry in other languages, a brief list of pumpkin world records, and recommended readings and Web sites.
McKy, Katie, and Pablo Bernasconi,Â Pumpkin Town! or, Nothing is Better and Worse Than Pumpkins, Sandpiper, 2008. (Grades PreK-2)
After five brothers accidentally spill seeds over a small town, they feel responsible when pumpkins and vines begin to overrun the houses the next year.
McNamara, Margaret, and G. Brian Karas,Â How Many Seeds in a Pumpkin?, Schwartz and Wade, 2007. (Grades PreK-2)
The story teaches math and science concepts while modeling kind behavior. The author introduces counting by twos, fives and tens and includes pumpkin facts, e.g., the more lines on the pumpkin, the more seeds it will have.
Pfeffer, Wendy, and James Graham Hale,Â From Seed to Pumpkin, Collins, 2004. (Grades PreK-2)
Accurately depicts germination, pumpkins growing and still green, pumpkins changing colors and uses for pumpkins.
Robbins, Ken,Â Pumpkins, Square Fish, 2007. (Grades PreK-3)
The author documents the life cycle of a pumpkin with close-up, naturalistic photos and clear, simple text. He discusses the wide variety of pumpkin colors and sizes. Basic instructions are included for carving a jack-o-lantern, with adult help suggested. The next year's crop, ensured by the pumpkins and their seeds left to rot in the field, is the focus of the last spread.