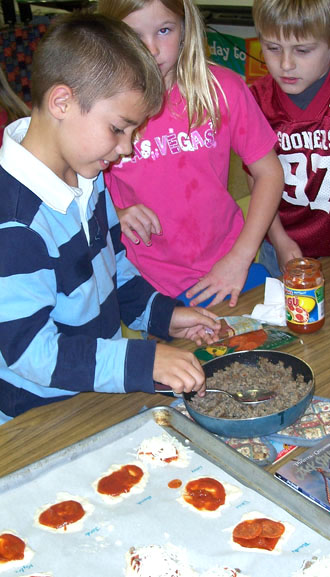 Before the tomato was introduced to Italy from the New World, pizza was another Mediterranean flatbread, like pita. By the late 18th century poor people in the the area around Naples were adding tomato to their yeast-based flat bread, and so the pizza was born.

Pizza came to the US with Italian immigrants in the 19th Century, but soldiers returning from World War II were responsible for making it popular. They had learned to love it while they were stationed in Italy and sought it out in Italian neighborhoods after they returned.

In Italy there are laws defining pizza, which set allowances on the type of flour, tomato, mozarella, olive oil, basil and oregano. Pizza as it was made originally can be nutritious and filling. Today it is sometimes considered junk food because of its high fat and sodium content. It can be healthy, though, when you make it yourself and choose healthy ingredients.

Pizza for Everyone
Pizza Portions

A metaphor is a figure of speech in which an implied comparison is made between two unlike things that have something in common. A metaphor expresses something unfamiliar by using something that is familiar.

The new USDA guidelines use a plate as a metaphor to describe the kinds of food we need to eat to be healthy. The plate is divided according to the proportions of each kind of food we should eat to be healthy. Each portion represents one of the food groups. The size of the portion represents how much of that kind of food should be eaten, compared with the other kinds of foods.

Try using a pizza as a metaphor for the different food groups: Take a look at theÂ USDA MyPlate GuidelinesÂ and see how the food groups are divided. Draw a picture of a pizza with slices that are divided in proportions that are similar to those in the MyPlate guidelines. Write a paragraph using your new metaphor to explain your food guide pizza.

Recipes
Songs and Poems
Crafts
Books
Auch, Mary Jane, and Herm Auch,Â The Princess and the Pizza, Holiday House, 2003. (Grades PreK-2)
When Princess Paulina's father surrenders his kingship, Paulina sets out for a neighboring kingdom to marry Prince Drupert. After easily passing the first two trials, Paulina passes the third by creating a delicious pizza with the ingredients provided. She decides to sprun marriage, howeer, and open a successful pizza palace instead.
Castaldo, Nancy,Â Pizza for the Queen, Holiday House, 2005. (Grades PreK-2)
Based on a true story, this picture book recreates the events which led to the creation of the Pizza Margherita, which represents the red, white and green of the Italian flag.
Dobson, Christina,Â Pizza Counting, Charlesbridge, 2003. (Grades PreK-2)
The math concepts of addition, large numbers and fractions are illustrated with artfully decorated pizzas depictin a smiling face, a cat, a flag, etc. The ingredients are counted in the text. Numerals are used to show the total of the two items. Another pie is symmetrically decorated with 100 garnishes and duplicated 10 times on one page and 100 times on the next to illustrate the numbers 1,000 and 10,000. Millions and billions are demonstrated by citing the number of pizzas needed to circle the globe and reach the moon. The book concludes with pies divided to show fractional concepts.
Hardesty, Constance,Â Grow Your Own Pizza, Fulcrum, 2000. (Grades PreK-2)
The fundamentals of gardening are covered with clarity and simplicity, from composting and mulching, planting and harvesting to maintenance and garden pests.
Holub, Joan, and Lynn Cravath,Â The Pizza That We Made, Puffin, 2001. (Grades K-1)
Young ones learn to make pizza from scratch. The rhyming text follows three friends as they collect ingredients, mix and knead the dough, add the toppings, bake and then clean the kitchen.