Oklahoma Fruit of the Month: Peaches

"An apple is an excellent thing, until you've tried a peach." Georges du Maurier, British illustrator and author.

China is widely held to be the native home of peaches. This is supported by the fact that there is a wide range of wild peach types in the countryside. Originally the peach grew in North China in areas of erosion and overgrazing. They were a symbol of fertility and affection.

While peaches are not a big cash receipts commodity for Oklahoma, they are important to several counties in the state. Peaches are primarily grown in Wagoner county, near Porter, and in Garvin and Pontotoc counties near Stratford. There are also some orchards in eastern Oklahoma county.

Just Peachy
Red Dirt Groundbreaker
Ben Marshall and His Prize Peaches
Porter, Oklahoma, is well-known in Oklahoma for its peaches, and that all started with Ben Marshall. Marshall was the son of a wealthy and prominent mixed-blood Creek who brought 19 slaves with him when he came west from Alabama in 1835 and settled at the fork of the Verdigris and Arkansas Rivers.
Ben was born in 1866 on his father's farm. He attended Tullahassee Mission and then went on to Carlisle in Pennsylvania, a college for Indian students. The famous athlete Jim Thorpe also attended Carlisle.
When Ben returned home he poured his energy into farming. He raised hundreds of acres of corn and cotton, cattle and hogs, and his operation was known as one of the finest farms in Indian Territory.
In 1890 Ben planted a peach orchard, the first in the area, about five miles southeast of Porter. The orchard was a great success. In 1904 Ben took his peaches to the Louisiana Purchase Exposition in St. Louis. The peaches were highly acclaimed at the World's Fair and were awarded a Gold Medal for quality.
Peaches emerged as a major cash crop in the area after that and have been an economic mainstay ever since.
Porter, in Northeastern Oklahoma, and Stratford, in south central Oklahoma, are both known for their peaches and for competing peach festivals held each summer. Students will locate Porter and Stratford on a map of Oklahoma and research to find the date of the peach festival.

Celebrate with a Giant Peach Day. ReadÂ James and the Giant PeachÂ while eating sliced peaches with yogurt or some other peach snack.

It's such a shock, I almost screech
When I find a worm inside my peach
But then, what really makes me blue,
Is to find a worm who's bit in two!
- William Cole

Be a Food Explorer: Dried Peaches

People travelling west in the 19th Century often carried dried peaches. Dry some peaches in a food dehydrator or in an oven at low heat. Have students try peaches dried, canned, fresh and frozen. Which do they like best? Sliced fresh peaches are a great addition to cereal for a healthy breakfast. Canned peaches taste great with plain yogurt. Add a little granola for crunch. 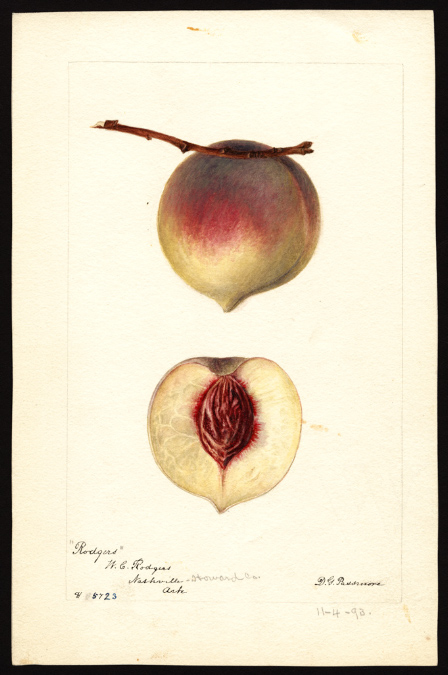 Prunus persica "Rodgers," from the USDA Pomological Watercolor Collection
Books
Dahl, Roald, and Lane Smith,Â James and the Giant Peach, Puffin, 2000. (Grades 4-6)
When James Henry Trotter loses his parents in a horrible rhinoceros accident, he is forced to live with his two wicked aunts. One day, an old man in a dark-green suit gives James a bag of magic crystals. When James accidentally spills the crystals on his aunts' withered peach tree, he sets the adventure in motion. From the old tree a single peach grows and grows an grows some more, until finally James climbs inside the giant fruit and rolls away to a new life.
Richards, Jean,Â A Fruit is a Suitcase for Seeds, Millbrook, 2003. (Preschool)
Introduction to seeds, their purpose and growth.
Stone, Lynn,Â FruitÂ (Plant Parts), Rourke, 2007. (Grades PreK-2)
Excellent resource for teaching pollination and seed development and the difference between a fruit and a vegetable.
Weiss, Ellen, From Pit to Peach Tree, Children's, 2007. (Grades PreK-2)
Describes peach production, beginning with the peach pit, and showshow peaches are harvested. 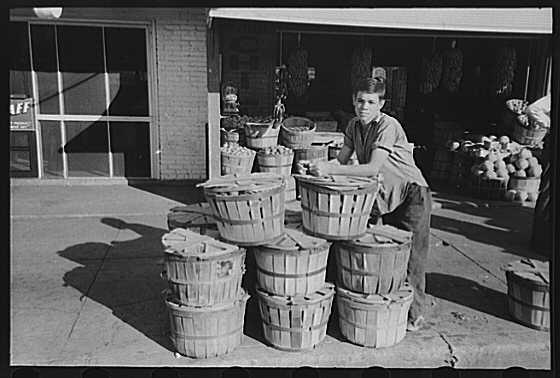