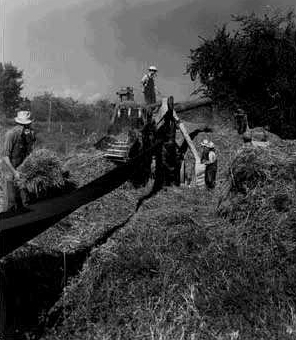 Labor Day is a celebration of the American worker and the contribution workers have made to the strength, prosperity and well-being of our country. Labor Day became an official holiday in 1894. The holiday was first proposed as a day to celebrate trade and labor organizations.

Farmers have certainly contributed to the strength, prosperity and well-being of our country. Early in the last century, farmers began to organize so they could make their lives better.

The Farmer's Union Movement in Oklahoma

The Farmers' Union movement started in Texas in 1902 and quickly moved into Oklahoma and Indian Territories. Some of the goals of the union were to help farmers get fairness in mortgage and credit practices, to help them get fair prices for their crops and to promote the use of science in agriculture. In 1905 the Indiahoma Farmer's Union requested the first study of soils ever made by the US Department of Agriculture.

The state farmer's union played an important part in drafting the Oklahoma Constitution. Union leadership represented almost half the elected delegates and was responsible for the election of "Alfalfa Bill" Murray as convention president. Murray was an organizing member of the Oklahoma Farmer's Union. Oklahoma's original motto,Â Labor omnia vincitÂ (Labor conquers all things), reflects the influence of the farmers' unions in Oklahoma's beginnings. The phrase is from aÂ poemÂ written by the Roman poet, Virgil, written in support of Augustus Caesar's push for Romans to return to farming.

Enrollment in the union dropped dramatically after statehood, partly because of the union's objection to US involvement in World War I. When the US did enter the war, groups that had been opposed were called unpatriotic and cowardly.

Hoboes on Harvest
Learn how the International Workers of the World (IWW) helped organize workers in the Oklahoma wheat fields.
In Strawberry Fields
Students compute the wages of strawberry workers.
History of Labor Day (US Dept. of Labor)
Books about Farm Labor
Artley, Bob,Â Once Upon a Farm, Pelican, 2000. (Young Adult)
The author grew up on an Iowa farm in the 1930s as the "age of the horse" was giving way to the "age of the tractor." Detailed sketches and color drawings illustrate the work involved - walking through the spring mud from barn to barn, carrying a bucket of feed, cleaning oat seed with a hand-powered fanning machine, etc.
Bernier-Grand, and David Diaz:Â Cesar: Si, Se Puede! Yes, We Can!, Marshall Cavendish, 2005. (Grades 6-8)
Poetry and illustrations illustrate Cesar Chavez' struggle to empower migrant workers using peaceful protest.
Denenberg, Barry,Â So Far From Home: The Diary of Mary Driscol, An Irish Mill Girl, Lowell Massachusetts, 1847,Â Scholastic, 2003. (Grades 4-7)
Fourteen-year-old Mary Driscoll and her family have lived in terrible poverty in the Irish countryside since the potato famine began several years ago. When Mary is offered a chance to join her aunt and older sister in America, she jumps at the chance to seek a better life for herself. But after a long, stormy, and miserable ocean voyage, Mary arrives in America to find that it is nothing like she expected. She takes a job in a textile mill in Lowell, Massachusetts, where she is scorned by most of the American workers and expected to work long hours under terrible, unsafe conditions. There are few bright spots in this account of the life faced by many girls in New England cities during the mid-nineteenth century, and most of what happened to the fictional character of Mary happened to various girls who lived back then and worked in factories and mills.
Hodge, Deborah, and Brian Harris,Â Up We Grow! A Year in the Life of a Small Local Farm, Kids Can, 2010. (Grades PreK-2)
Photos invite children into the world of a small, cooperative farm over four seasons. Readers get to know the hardworking farmers as they plow, plant, compost, mulch, harvest and market fruits and vegetables and care for animals.
Krull, Kathleen, and Yuyu Morales,Â Harvesting Hope: The Story of Cesar Chavez, Harcourt, 2003.
The story of Cesar Chavez' 340-mile march to protest working conditions of migrant farmworkers in California.
McMullan, Margaret,Â How I Found the Strong, Houghton-Mifflin, 2005. (Grades 6-12)
Ten-year-old Frank Russell is left to run his family's small farm when his father and brother go off to fight in the Civil War.
Perez, L. King, and Robert Casilla,Â First Day in Grapes, Lee & Low, 2002. (Grades 1-3)
Growing up in a migrant family, Chico has experienced first school days in artichokes and first days in onions, and "now his first day in third day would be in grapes." His encounters with bullies and the grumpy school bus driver shake Chico's confidence, but a friendly classmate and an understanding teacher help him adjust.
Rosen, Michael,Â Our Farm: Four Seasons With Five Kids on One Family's Farm, Darby Creek, 2008. (Young Adult)
Readers learn about baling hay, tending cattle, work dogs, hunting manure and other activities on the farm.
Ryan, Pam Munoz,Â Esperanza Rising, Scholastic, 2002. (Grades 4-6)
Esperanza's mother escapes her stepbrothers, who are holding her as a social and economic hostage, by moving with Esperanza to the US to work in California's agricultural industry. Set against the multiethnic labor-organizing era of the Depression, this book should make good class discussion.
Schomp, Virginia,Â If You Were a...Farmer, Benchmark, 2001. (Grades K-3)
Colorful pictures and easy text help paint a picture of farming and ranching life.