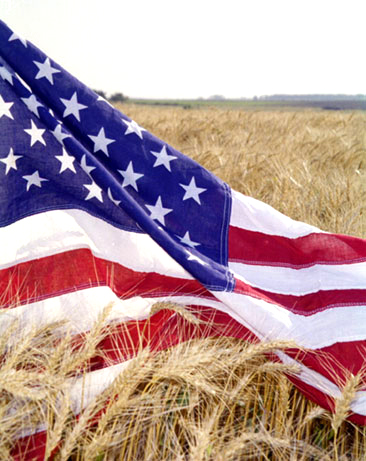 Independence Day celebrates our country's Declaration of Independence, eloquently written by Thomas Jefferson. Jefferson believed a strong agriculture was key to making the new nation strong and maintaining our independence:
"Agriculture is our wisest pursuit, because it will in the end contribute most to real wealth, good morals and happiness." -Thomas Jefferson

Fourteen of our nation's Founding Fathers were also farmers, as were most people at that time. More thoughts about agriculture from the Founding Farmers.

"It will not be doubted, that with reference either to individual, or National Welfare, Agriculture is of primary importance. In proportion as Nations advance in population, and other circumstances of maturity, this truth becomes more apparent; and renders the cultivation of the Soil more and more, an object of public patronage."

"I had rather be on my farm than be emperor of the world."

"I know of no pursuit in which more real and important services can be rendered to any country than by improving its agriculture, its breed of useful animals, and other branches of a husbandman's cares."

"From breakfast, or noon at the latest, to dinner, I am mostly on horseback, attending to My Farm or other concerns, which I find healthful to my body, mind, and affairs."

"I think our governments will remain virtuous for many centuries; as long as they are chiefly agricultural."

"Those who labour in the earth are the chosen people of God, if ever he had a chosen people, whose breasts he has made his peculiar deposit for substantial and genuine virtue. It is the focus in which he keeps alive that sacred fire, which otherwise might escape from the face of the earth."

"Cultivators of the earth are the most valuable citizens. They are the most vigorous, the most independent, the most virtuous and they are tied to their country and wedded to its liberty and interests by the most lasting bands."

"There seem to be but three ways for a nation to acquire wealth. The first is by war, as the Romans did, in plundering their conquered neighbors. This is robbery. The second by commerce, which is generally cheating. The third by agriculture, the only honest way, wherein man receives a real increase of the seed thrown into the ground, in a kind of continual miracle, wrought by the hand of God in his favor, as a reward for his innocent life and his virtuous industry."