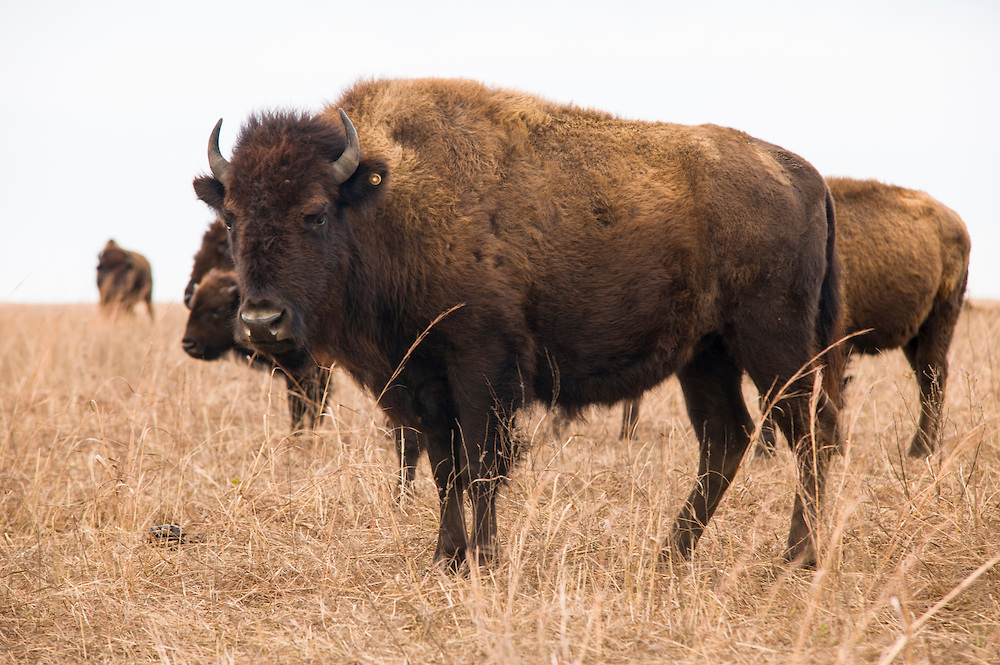 The American bison belongs to the same family of mammals as domestic cattleâthe Bovidae family. Early explorers often mistook bison for beef cattle. The Spanish explorer Cabeza de Vaca called bison "Indian cattle," and early French explorers called them “boeuf,” (pronounced buff), the French word for beef. The English took that name and changed it to buffalo, the name most people now have for the bison. In fact, the true buffalo is related to bison and cattle but is an oxlike animal that comes from Europe and Asia. The water buffalo is one example.

Because bison have so much in common with domestic cattle, pioneering ranchers on the Great Plains thought it would be worthwhile to capture and protect small herds from the hide hunters that wiped them out between 1871 and 1873. Since the bison had adapted to the harsh conditions of living on the Great Plains, some cattlemen hoped they could develop heartier breeds of cattle by breeding bison with their cattle.

Bison go off to calve by themselves and need no assistance from humans. The calves are immediately on their feet after birth and easily keep up with their mothers on a steady run. Bison work together in herds to protect each other against predators and the environment. They can weather storms and help their new-born calves survive in blizzards. Bison stand facing the winter winds instead of moving with the wind like cattle do. Their heavy winter coats protect them from the bitter cold. Bison can root through heavy snow to get to the grass below. If necessary, they can eat snow to survive. Some live to be 40-50 years old.

Bison have poor eyesight but a keen sense of smell. They appear slow and awkward but can outrun and outmaneuver most horses. They are incredibly fast, can pivot on their hind feet and their front feet, and can jump over a fence with ease.

Private ownership of bison has quadrupled in the last 20 years. Farmers and ranchers can place bison on range and pasture land that is not suitable for growing crops. Their numbers have grown so large on government reserves that government officials have started to sell the excess animals at public auctions. Many people buy these animals to start their own herds.

Bison are also playing an important part in restoring our prairie ecosystems in places like the Tall Grass Prairie Preserve in Osage County. The large herds fertilize the land with their droppings while their hooves plow it. In turn the prairie's grasses feed them.

Bison meat has a flavor similar to that of beef. It has a similar protein content as well but is lower in fat and cholesterol. That's because bison get all their food from grazing and do not get supplementary feeds like cattle do. A three-ounce serving of bison meat is 21.7 percent protein and contains about 1.9 grams of fat, 93 calories, and 75 milligrams of cholesterol. A three-ounce serving of lean beef is 21 percent protein and contains 4-8 grams of fat, 143-179 calories, and between 57 and 76 milligrams of cholesterol.

Bison meat is available for sale in many restaurants and grocery stores across Oklahoma. It is considered a gourmet item and is usually more expensive than beef. On the shelf it is a darker red than beef and is sometimes mistaken for old beef.

At Home on the Range
Book
Robbins, Ken,Â Thunder on the Plains: The Story of the American Buffalo, Atheneum, 2009. (Grades 4-6)
Robbins briefly traces the history of the American buffalo from 1875, when there were perhaps 50 million of them, to the present, in which laws protect the surviving 200,000. "This is the story of a great shaggy creature, a very American beast, one found here and nowhere else," he begins. Robbins supplements the text with dramatic images, including his own photographs of present-day buffalo grazing in Oklahoma.