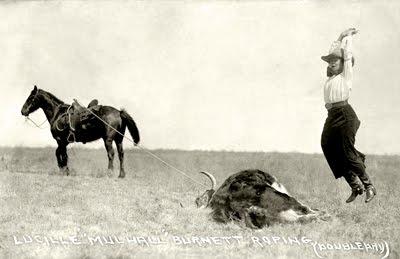 March 8 is International Women's Day. According to the USDA, 31% of American farmers are women.

Red Dirt Groundbreaker
Lucille MulhallâThe First Cowgirl
As a small child, Lucille Mulhall rode her pony over her father's large ranch in Oklahoma Territory. She learned to rope and tie a steer and to shoot a rifle. Her teachers were the men who rode herd in the cattle drives of the Old West.
By the time she was seven, Lucille had her own herd of cattle. Her father had promised she could have all the yearlings she could rope and brand herself. He soon had to get out of this bargain because Lucille had claimed too many calves. Lucille got her start in show business as the star of her father's "Congress of Rough Riders and Ropers" in 1899 at a county fair in St. Louis. The show also featured the young Will Rogers.
She was among the first women to compete in roping and riding events against men and earned such titles as "Champion Lady Steer Roper of the World" at the Winnipeg Stampede. She starred in Mulhall's Wild West, the Miller Brothers' 101 Ranch Wild West Show, and in vaudeville. In 1913 she formed her own troupe.
In 1916 she produced her own rodeo, Lucille Mulhall's Roundup, which some historians believe was the first indoor rodeo, although it wasn't called that. It was held in Fort Worth in what is now the Cowtown Coliseum during the stock show there. More than 50 cowboys and cowgirls competed for prizes in events such as roping and bronco busting.
Lucille Mulhall's popularity was due to her skill, the result of perfect timing with her rope, unusual balance on her horse, and her small size and ladylike behavior. She was inducted into the Rodeo Hall of Fame in 1975 and National Cowgirl Hall of Fame in 1977.
Lucille Mulhall: The First Cowgirl 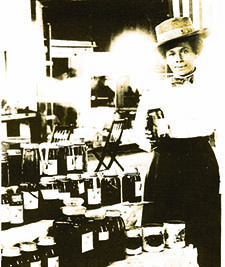 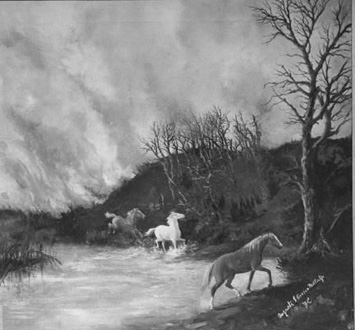 From 1917 to 1919, the Women's Land Army of America brought more than 20,000 city and town women to rural America to take over farm work after men were called to war. "Before Rosie the Riveter, Farmerettes Went to Work" - Smithsonian.com, May 29, 2009 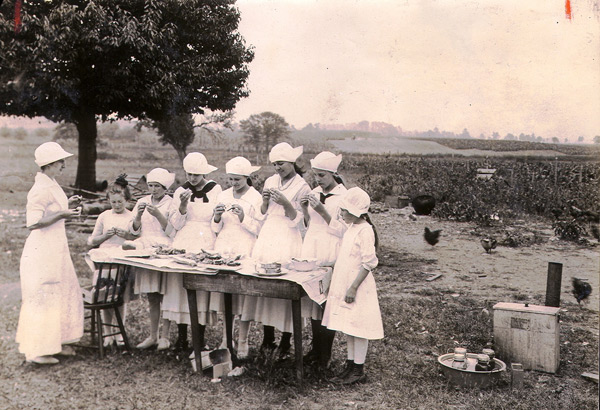 Books
Connor, Leslie, and Mary Azarian,Â Miss Bridie Chooses a Shovel, Houghton Mifflin, 2005. (Grades K-3)
A young immigrant girl selects a shovel to accompany her on a voyage to America in 1856. The shovel provides subsistence, shelter and safety as it transforms the land and enriches her life.
George-Warren, Holly,Â The Cowgirl Way: Hats Off to America's Women of the West, Houghton-Mifflin Books for Children, 2010. (Grades 4-6)
With dynamic photos and live quotes throughout, the author presents an overview of the history of cowgirls up to the present. Since women did much of the ranch work in the past, they helped break down social and economic inequalities, and the Western states often led the way in passing laws such as the right for women to own land and vote. Includes anecdotes about Oklahoma's own Lucille Mulhall, the first woman to be called a cowgirl in print. The book also includes an overview of fashion and looks at today's cowgirls.
Katz, William Loren,Â Black Women of the Old West,Â Atheneum, 2007 (Young Adult).
Using primary sources and featuring dozens of black-and-white archival photographs and reproductions, Katz recounts stories of African American women who made the journey west and illuminates the times in which they lived and their reasons for going. Some women of color escaped west from slavery. Others sued for freedom after being taken there by their owners. Still others came as mail-order brides. Many black women flourished on the frontier, where they found more opportunities for education and better paying jobs.
Larsen, Kirby,Â Hattie Big Sky, Delacorte, 2006. (Young Adult)
Sixteen-year-old orphan Hattie Brooks leaves Iowa and travels to a Montana homestead inherited from her uncle. She has less than a year to fence and cultivate the land in order to keep it.
Savage, Candace,Â Born to Be a Cowgirl: A Spirited Ride Through the Old West, Tricycle, 2004. (Grades 4-6)
This survey highlights the vigorous horsewomen who helped shape the West. Savage focuses on the daring girls and women who defied convention to ride horses, lasso cattle and buck broncos. Sidebars present the cowgirls in their own words. Handsomely tinted vintage photos showcase the power of these frmale cowgirls, wrestling calves to the ground and jumping over everything from fences to cars.