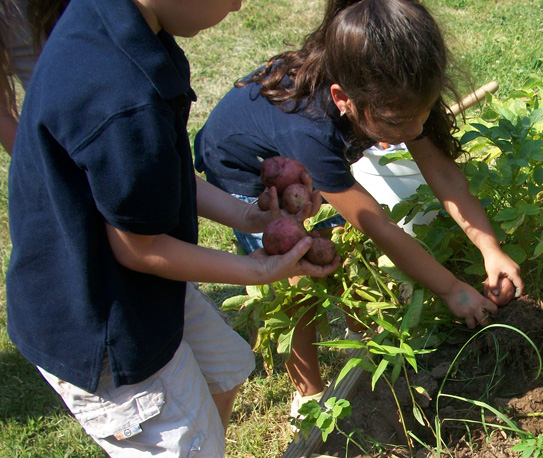 A Priceless Collection
5th-8th Grade Science, Social Studies, Language Arts and Math
The dramatic story of Russian plant breeder Nikolai I. Vavilov, who faced starvation during World War II to protect and preserve a valuable collection of seed potatoes.
Powerful Potato
3rd-6th Grade Language Arts, Math, Social Studies, Science and Visual Arts
Students observe the growth process of a potato.
The Nightshades: Potatoes, Tomatoes and Peppers
1st-6th Grade Language Arts, Math, Science, Visual Arts, Music
All about the Nightshades.
Books
Bartoletti, Susan Campbell,Â Black Potatoes: The Story of the Great Irish Famine, 1845-1850, Houghton-Mifflin, 2001. (Grades 4-6)
In 1845, a mysterious blight attacked the potato crops in Ireland, turning the potatoes black and destroying the only real food for nearly 6 million people. Over the next five years, the blight attacked again and again. These years were known as the Great Irish Famine, a time when one million people died from starvation and disease and two million more fled their homeland.Â Black PotatoesÂ is the story of the children and adults who suffered from this disaster.
Blackaby, Susan, and Charlene Delage,Â Root Plumbing: A Book About Roots and Stems, Picture Window, 2005.
How do plants store food during cold winter? How do they carry water up the leaves? The author explains the role of roots and stems, the two types of roots, stems found both above and below ground, the function of their structures and how both help plants survive. Also includes some simple experiments.
Bloom, Amy Beth, and Noah Z. Jones,Â Little Sweet Potato,Â Katherine Tegen, 2012. (Grades PreK-2)
The carrots are disdainful. The eggplants, full of themselves. "You're a lumpy, bumpy, dumpy vegetable, and we're beautiful," the flowers sneer. Luckily, in this mean-kids parable, Little Sweet Potato finds a more accepting patch of flora to plant himself in.
de Las Casas, Dianne, and Marita, Gentry,Â The Gigantic Sweet Potato, Pelican, 2010.
When Ma Farmer gets a hankering for sweet potato pie, she decides to plant a sweet potato in her garden. But when it is time to harvest, the sweet potato has grown to be so enormous that it is stuck. Includes a recipe for sweet potato pie and sweet potato facts. (Adaptation of the Russian folktale, "The Giant Turnip.")
Llewellyn, Claire,Â What's for Lunch? Potatoes, Franklin Watts, 2003. (Grades 1-5)
Explores the different ways in which potatoes are produced and processed. Shows how potatoes are grown and how people around the world eat them in a variety of ways. Inlcudes below-the-soil photos which show tuber formation and growth.
Weiss, Ellen,Â From Eye to Potato, Children's, 2007. (Grades PreK-2)
Shows how potatoes are grown and harvested.