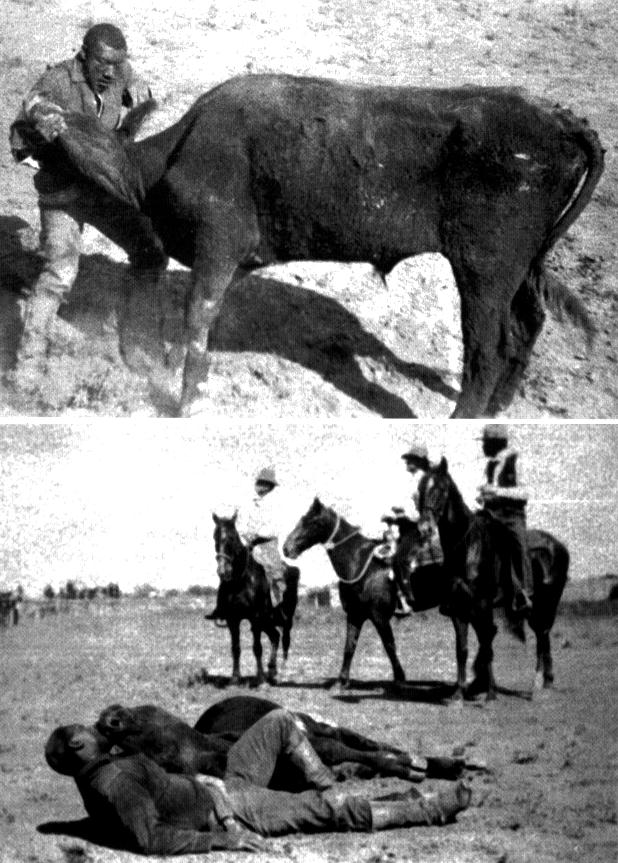 Started by African American historian Carter G. Woodson in 1926 and chosen to coincide with the birthdays of Frederick Douglass and Abraham Lincoln, the month-long celebration recognizes contributions African-Americans have made to our collective culture and history.

Oklahoma agriculture played an important role in the history of African Americans. Indian Territory provided a new beginning for many freed slaves, who came here to formÂ townsÂ and farm. Others becameÂ cowboysÂ and joined cattle drives.

Oklahoma's own Bill Pickett was a cowboy working at theÂ Miller Brothers 101 RanchÂ who became famous for a rodeo trick, bulldogging, that he invented.

See this lesson to learn more:

Other lessons related to Black History

All Black Towns: Edward P. McCabe and Annie Peters
Read about two pioneering citizens of Oklahoma's all-Black towns.
The Peanut Wizard
3rd-5th Grade Science and Language Arts
Students read about George Washington Carver and outline the information.
Cotton Pickin': Before and After the Civil War
6th-8th Grade Social Studies and Language Arts
Students examine the importance of cotton to the economy of the South before and after the Civil War.
African Americans have a rich and delicious food history that we know as soul food. Sweet potatoes, black-eyed peas, okra and some other traditional soul food ingredients were brought with slaves from Africa or were combined with foods native to the Americas and form the basis for some historically African-American dishes that we still know and enjoy.
Recipes
Books
Durham, David Anthony,Â Gabriel's Story, Doubleday, 2001. (Young Adult)
Set in the 1870s, the novel tells the tale of Gabriel Lynch, an African American youth who settles with his family in the plains of Kansas. Disatisfied with the drudgery of homesteading and growing increasingly disconnected from his family, Gabriel forsakes the farm for a life of higher adventure.
Gunderson, Jessica, and Jerry Acern,Â Eli Whitney and the Cotton Gin, Capstone, 2007. (Grades 1-7)
Uses comic book-style word balloons and sophisticated vocabulary to tell the story of Eli Whitney and the invention of the cotton gin. Explores the impact the cotton gin had on the Civil War and the ultimate emancipation of the slaves. Includes a timeline of advances made by Whitney, a glossary and a recommended reading list.
Hamilton, Virginia,Â The People Could Fly: The Picture Book, Knopf/Random House, 2005. (Grades 3-5)
A group of African slaves working in coton fields in America escape an abusive overseer through magic recalled from Africa.
Schlissel, Lillian,Â Black Frontiers: A History of African American Heroes in the Old West, Simon and Schuster for Young Readers. (Grades 4-7)
Photographs and pictures dating from 1852 to 1948 show Black men prospecting for gold, riding bucking broncos and serving in the military.
Woodson, Jacqueline, and Hudson Talbott,Â Show Way, Putnam, 2005. (Grades K-5)
A Show Way is a quilt with secret meanings, and the image works as both history and metaphor in this picture book. Based on Woodson's own history, the story is of African American women across generations, from slavery and the civil rights movement to the present. Growing up on a plantation in South Carolina, Soonie learns from Big Mama about children "growing up and getting themselves free," and also how to sew quilts with signs that show the way to freedom.