Soup of the Evening, Beautiful Soup 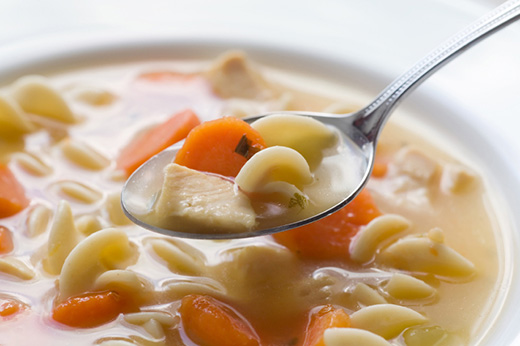 January is National Soup Month. In early times soup was called "pottage" (from pot and the LatinÂ potare, to drink), but by the Middle Ages, the word "soup" had replaced "pottage" in most European languages. The word soup is thought to have come from the sound made by slurping hot liquid from a spoon. Some variations of the word are soop, sopa, sope, soepe, suppa, soppe, soep, suppe, soppa, sopera, soupe, chupe, zuppa, and zup. To sup was to eat the evening meal at which soup was traditionally served. Eventually the meal itself became supper.

Most soups have stock as a base. Stock is made by simmering various ingredients in water, including meat, bones, vegetables, herbs and spices. The flavor of bone stock comes from the cartilege and connective tissue in the bones. The gelatin in bone broth has many health benefits. Connective tissue has collagen in it, which gets converted to gelatin that thickens the stock. The less desirable parts of vegetables (such as carrot skins and celery ends) are often used in stock.

Oklahoma Stone Soup
Writing Prompts
Books
Brown, Marcia,Â Stone Soup, Atheneum (reprint), 2010. (Grades PreK-2)
Old French tale about soldiers who trick miserly villagers into making them a feast.
Compestine, Ying Chang,Â The Real Story of Stone Soup, Dutton Juvenal, 2007. (Grades PreK-2)
A fisherman complains that the three boys he has hired to work on his boat are stupid and lazy, even though the illustration reveals that he is lounging while the boys toil. For lunch one day the boys make a soup, tricking their boss into believing it is river stones that create the flavor. The boss returns to the village, boasting of his new discovery. A recipe for Egg Drop Soup is included.
Kimmel, Eric A., and Phil Huling,Â Cactus Soup, Marshall Cavendish, 2004. (Grades PreK-2)
This Mexican variant of Stone Soup calls for a single cactus thorn as the soup's base.
Madden, Eric,Â Nail Soup, Frances Lincoln Children's, 2009. (Grades PreK-2)
A traveler in the forest stops at a lonely cottage, hoping to beg a bed for the night. The scowling woman who answers the door agrees to let him sleep on the floor but declares she hasn't a bit of food in the house. He takes a rusty old nail from his pocket and starts to make nail soup.
Muth, Jon J.,Â Stone Soup, Scholastic, 2003. (Preschool)
Another Chinese version of the tale, this time with monks and selfish villagers.