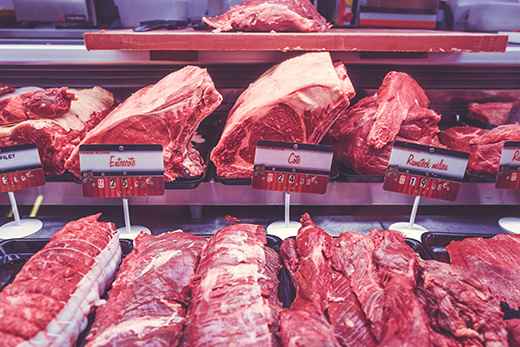 Build a Burger
Students explore the components of a hamburger and build models of their own to create a balanced, nutritious meals. (1st-4th grade English language arts and math)
A Lucky Break
Students identify and decipher some common phrases in the English language that are related to poultry. (4th-6th grade English language arts, science, social studies and visual arts)
Truth or Hogwash?
Students will work in teams to play a game in which they answer true/false questions about swine and then research and develop questions of their own. (2nd - 5th grade English language arts)
They Don't Just Eat Grass
Students compare and contrast different energy values of animal feeds by graphing the net energy for maintenance and percentage of fat for a variety of feed types. (6th-8th grade science and math)
Meat Recipes
Writing Prompts
Red Dirt Groundbreaker
Roy J. Turner and Hazford Rupert the 81st 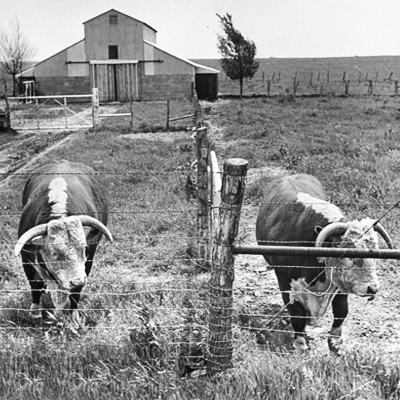 Hereford Cattle at the Turner Ranch, 1944
Roy Turner was governor of Oklahoma from 1947 to 1951, but he may have been more famous for his prize bull, Hazford Rupert the 81st.
Hazford Rupert 81st was the 1936 international champion, and the nation's first "million-dollar bull." Featured in various articles in Time and Life magazines, the bull in its lifetime produced hundreds of descendents valued at well over $1 million.
Turner was born near Kendrick in 1894. He built his ranch near Sulphur with royalties from his oil-rich land. The area where Turner's ranch was located was called "Hereford Heaven" because some of the most important sires and dams in the national Hereford registry came from ranches located there. In 1963 Turner sold his ranch to Winthrop Rockefeller.
Governor Turner built highways (including Turner Turnpike) and farm-to-market roads, consolidated some small school districts, and secured passage of a common school bill that provided free text books. President Harry Truman asked Turner to become secretary of agriculture in 1949, but Turner declined the offer. While governor of Oklahoma and after leaving office, Turner sponsored livestock exhibitions and judging contests for 4-H Clubs and Future Farmers of America.
Turner's hobby was writing and singing country and western songs. One of his songs was named for Hereford Heaven.
Books
Green, Emily K.,Â Meat and Beans: The New Food Guide Pyramid, Bellweather, 2006. (Grades K-3)
Lavis, Steve,Â Cock a Doodle Doo: A Farmyard Counting Book, Ragged Bears, 2001. (Preschool)
One rooster crows to wake everyone up, then two horses neigh, and others oin in until the farm is filled with squeaks, moos, clucks and more from ten different kinds of animals.