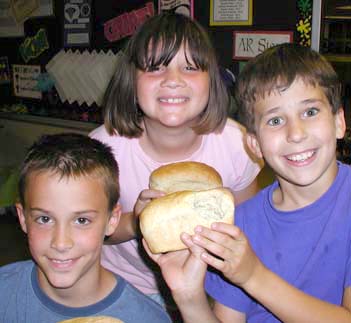 Bread in a Bag Kits available from:

The "father" of sliced bread is Otto Rohwedder, a former jewelry store owner. He had started work on a slicing machine in 1912, and when bakers told him sliced bread would go stale quickly, he developed an apparatus for holding all of the slices together with hat pins. This wasn't too successful as the pins continued to fall out.

An obvious solution would be a wrapper, but it was not that obvious at the time. Wrapping, however, proved to be the key to success, and in May, 1928, a Battle Creek, Michigan, bakery began turning out the first sliced bread, using Rohwedder's newest slicer, which also wrapped and sealed the loaf.

Bread in a Bag
Little Red Hen
The old classicÂ The Little Red HenÂ is perfect for exploring the process by which wheat is turned into bread. It's also a great way to discuss with your students all the careers involved in making a loaf of bread.
Wheat: From Field to Oven
The student will read some paragraphs about wheat production and identify the main idea and supporting statements for each one.
Writing Prompts

In value of products, agriculture-related manufacturing predominated in 1909-10. The flour milling industry was by far the most productive, its 295 plants and 842 workers accounting for $19 million of the state's total $53 million industrial output. Exemplary was John Kroutil's Yukon Mill and Grain Company, begun in 1902, andÂ Shawnee Milling Company, which began as a roller mill in 1906 (still in business). In 1891 Kingfisher had 12 flour mills. By 1950 38 flour mills operated in the state. (Oklahoma Historical Society Encyclopedia of Oklahoma History & Culture)

Red Dirt Groundbreaker
John Kroutil, Yukon Miller
John Kroutil immigrated from Czechoslavakia with his parents in 1881. The family first settled in Nebraska before coming to Oklahoma Territory in 1890. John and his brother Frank purchased the Yukon Mill and Grain Company in 1902.
Other Czechs had migrated to the young territory in the land runs of the 1890s, north from Texas and south from Nebraska and Kansas. Because many had been wheat farmers in their native country, they grew wheat in the new land and were happy to take their grain to the Kroutil brothers, where they could do business in their native tongue.
Milling was an important industry in the early years of statehood. In 1910 the flour milling industry was by far the most productive. There were 295 plants and 842 workers. Total sales were $109 million of the state's $53 million industrial output. Yukon Mill and Grain Company was among the most successful, along with Shawnee Mills, owned by J. Lloyd Ford.
John Kroutil served as president of the Yukon Mill and Grain Company until his death in 1954. In 1912, he and his brother opened the Yukon National Bank. John Kroutil also served as president of the Yukon Electric Company, which was formed in 1907 after a steam-powered electric generating plant was built near the mill.
For his philanthropy and business leadership Kroutil was inducted into the Oklahoma Hall of Fame in 1933. On June 12, 1954, he died of a heart attack on his farm near Piedmont.
Books
Levenson, George,Â Bread Comes to Life, Tricycle, 2008. (Grades 1-3)
The story of wheat in a rhyming poem with excellent photos. The baker sows the seed in his backyard and sowing and threshing are done by hand rather than by modern methods.
Reed, Janet,Â Everyone Eats Bread, Red Bricklearning, 2003. (Grades PreK-2)
Early reader with excellent photographs good for teaching about culture and meeting human needs.
Taus-Bolstad, Stacy,Â From Wheat to Bread, Lerner, 2002. (Grades PreK-3)
Treuille, Eric,Â Bread, DK, 2007. (Grades 6-Adult)
Moves beyond the basics of how bread is made and explains how cultures interpret bread and how bread impacts culture. It explores a wide variety of bread from across the globe and explains the characteristics of each and what its name signifies.